The K League Classic club said they've completed foreign player signing for the 2017 season by acquiring Orsic. In the K League, teams are allowed to have three foreigners, in addition to one player from an Asian Football Confederation (AFC) member country, which is also known as the Asian quota.

Orsic, 24, played with South Korean side Jeonnam Dragons for two seasons before moving to China last year. With Jeonnam he had 14 goals and 11 assists in 49 matches.

Ulsan said Orsic is a forward who is known for powerful shots, good dribble skills, and his ability to support teammates.

Orsic, who also had stints in Italy and Slovenia, will reunite with his former Jeonnam teammate Lee Jong-ho at Ulsan. Lee joined the two time K League champions this season from another South Korean club Jeonbuk Hyundai Motors.

The 2012 AFC Champions League (ACL) winners are in Group E where they will meet Kashima Antlers of Japan, Muangthong United of Thailand and Brisbane Roar of Australia.

Ulsan originally didn't qualify for this year's ACL, but were given a playoff spot after defending champions Jeonbuk's expulsion following their bribery scandal involving a scout and referees. 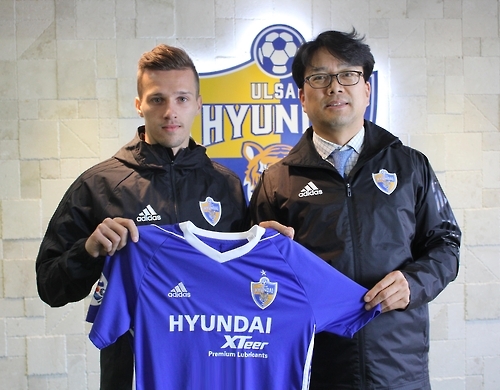