The talk of another crisis has recently emerged as the country has been grappling with weak exports, flagging domestic consumption and a leadership crisis triggered by the impeachment of President Park Geun-hye over a corruption scandal.

"Experts say there won't be another precipitous economic crisis and I also share that view," Yoo told a parliamentary interpellation session, referring to the 1997 Asian financial crisis that struck the country. 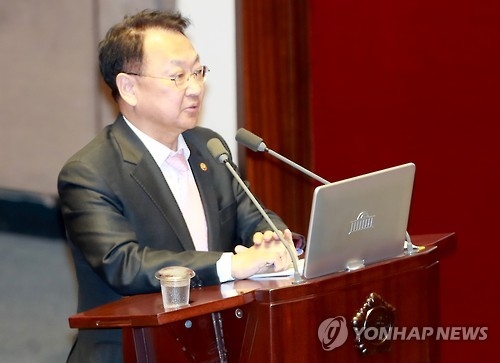 Yoo, who also doubles as deputy prime minister for economic affairs, stressed that "things are different" from what they were 20 years ago.

"There are some similar indicators (that the country saw during the 1997 crisis), but the markets remain stable despite low growth," he said. "In particular, the country has solid fundamentals and room for fiscal policies to prop up growth."

The finance minister also raised concerns that a fast-graying South Korea could replicate the economic malaise Japan has suffered for the past decades.

"The low fertility rate, coupled with the aging population, in addition to the weakening competitiveness of our mainstay industries... If these problems persist, it would not be good for our economy," he said.

Asked if Korea can be labeled by the newly minted U.S. administration as a foreign exchange rate manipulator, Yoo said, "Chances are low at the moment."

U.S. President Donald Trump has recently accused China and even American allies -- Japan and Germany -- of manipulating their currencies, an accusation that warned of a possible trade war.

Yoo pointed out that Seoul has been making "proactive" efforts to stave off the labeling.

"It will be helpful if we make investments or import shale gas from the United States to reduce (our) current account surpluses (from trade with the U.S.)," he said without elaborating on what investments should be made.