Jeonbuk, the winners of the 2016 Asian Football Confederation (AFC) Champions League, said the 27-year-old footballer, better known as Mazola, will play in the K League Classic for the upcoming season.

Jeonbuk said Mazola knows Asian players well because he previously played with the Urawa Red Diamonds of Japan and Hangzhou Greentown of China. Last year, the speedy attacker scored 14 goals in 28 matches for the second division Chinese club Guizhou Hengfeng Zhicheng and helped their promotion to the Chinese Super League.

The acquisition of Mazola completes the foreign player signings for the four-time South Korean league champions. In the K League, teams are allowed to have three foreigners, in addition to one player from an AFC member country, which is also known as the Asian quota.

Jeonbuk earned their spot for the 2017 AFC Champions League (ACL) by finishing second in the domestic league last year. The two-time ACL champions, however, won't be allowed to defend their continental title this year after the Entry Control Body (ECB), a judicial body independent of the AFC, banned them for their "indirect involvement in activities aimed at arranging or influencing the outcome of matches," following a bribe scandal.

Last September, one of Jeonbuk's scouts was convicted of bribing referees in 2013. They were docked nine points by the K League's disciplinary committee -- which cost them a chance to win their third straight domestic league title -- and were fined 100 million won (US$87,220). 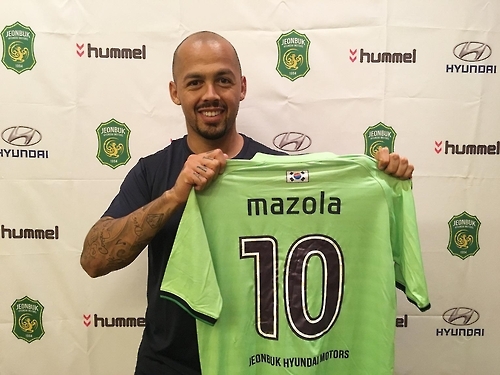