PYEONGCHANG, South Korea, Feb. 9 (Yonhap) -- Acting President and Prime Minister Hwang Kyo-ahn on Thursday vowed to complete the construction of facilities for the 2018 PyeongChang Winter Olympics "at an early date," amid concerns that a corruption scandal involving President Park Geun-hye and her friend could hamper preparations for the quadrennial games.

During a meeting on the preparations for the 2018 Olympics set for Feb. 9-25, Hwang also reiterated all facilities will be fully equipped to ensure the safety of athletes, spectators and other visitors.

"PyeongChang Winter Olympics a year later will serve as a crucial turning point of (our) history that heralds the Republic of Korea's new leap forward," Hwang said at the meeting. 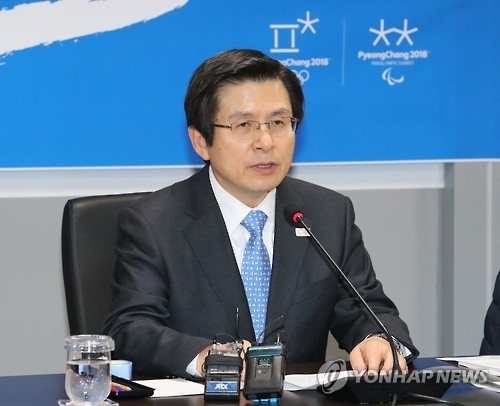 "Although there have been concerns related to the preparations for the games, which were triggered by recent national challenges, we definitely have to seamlessly and unwaveringly prepare for it and successfully host it," he added, referring to the corruption scandal.

Suspicions have persisted that Park's friend Choi Soon-sil and her relatives have sought to win lucrative contracts related to the Olympics by exploiting her close ties to the president.

A dozen venues -- seven for sports on snow and five for events on ice -- will be used during the first Winter Olympics in South Korea. Six are being constructed, while six other existing venues will be refurbished for the quadrennial competition in PyeongChang and its sub-host cities of Gangneung and Jeongseon in Gangwon Province.

As of January, the six new facilities are on average 96.3 percent complete, according to the organizers.