Kim finished sixth in the event with a time of 4:03.85 at the International Skating Union (ISU) World Single Distances Speed Skating Championships at Gangneung Oval in Gangneung, Gangwon Province, some 230 kilometers east of Seoul.

The 24-year-old wasn't considered a serious title contender in the 3,000m, where she is 15th in the ISU World Cup points race this season. Still, Kim said she didn't expect she'd skate so well.

"I had zero expectations for myself," Kim said after her race. "I wanted to do well before the Korean fans."

Gangneung Oval will host speed skating at the 2018 PyeongChang Winter Olympics. The ongoing ISU competition is also an Olympic test event, and the first official race held at the brand new arena. 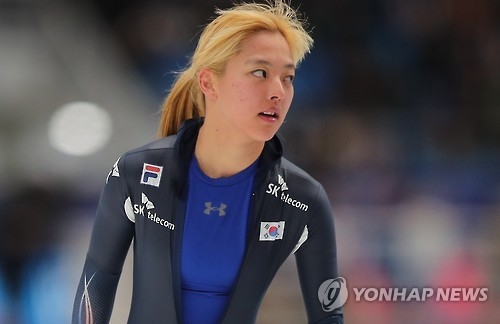 "I like this ice surface, and I think it suits my skating style," Kim said. "Before the race today, I told myself, 'This is the Olympics.'"

After the Worlds, Kim will travel to Sapporo, Japan, for the Asian Winter Games. The 3,000m is largely dominated by Europeans -- the three medalists on Thursday all came from the continent -- and Kim and Miho Takagi of Japan (10th) are the only two Asian skaters inside the top 20 in the World Cup rankings this season.

On Thursday, Kim outperformed Takagi, who finished eighth at 4:04.50. But the South Korean refused to make a big deal out of her small victory over her regional rival.

"Though I skated faster today, I still have to prepare myself hard until the Asian Games," Kim said. "I am happy that I was able to narrow the gap between myself and the top skaters, but I shouldn't get too excited."

S. Korean speed skater surprised with herself after breaking record

S. Korean speed skater surprised with herself after breaking record