GANGNEUNG, South Korea, Feb. 9 (Yonhap) -- PyeongChang, the South Korean host of the 2018 Winter Olympics, marked the start of the one-year countdown to the competition with a series of performances incorporating both contemporary and traditional Korean culture.

PyeongChang, an alpine resort town some 180 kilometers east of Seoul in Gangwon Province, will stage the country's first Winter Olympics from Feb. 9 to 25 next year, under the slogan "Passion. Connected."

Gangneung Hockey Centre in Gangneung, just east of PyeongChang, provided the stage for celebrations Thursday. Gangneung is one of the sub-host cities for the Olympics and will stage ice events such as figure skating, speed skating and hockey.

PyeongChang beat out Germany's Munich and France's Annecy in an International Olympic Committee (IOC) vote in 2011, winning the Winter Games bid in its third try. 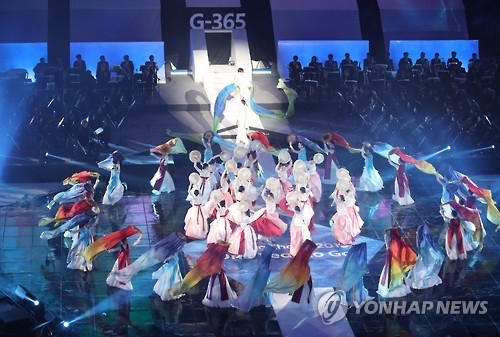 Under the slogan "Passion. Connected," the 2018 Olympics will have 102 gold medals at stake, the most in Winter Games history. PyeongChang is expected to host athletes from 95 nations, which will also be a Winter Olympic record.

The organizers said the construction of various facilities are all on schedule, with the competition venues 96.3 percent complete on average. A dozen venues -- seven for sports on snow and five for events on ice -- will be used. Six are being constructed, while six other existing venues will be refurbished for the quadrennial competition.

The celebration featured a performance of the "2018 Choir," representing the year of the Olympics. The Olympic torch, unveiled earlier Thursday, was also displayed during the festivities, with former Olympic figure skating champion Kim Yu-na carrying it into the arena.

At the celebration, Hwang Kyo-ahn, prime minister and acting president, said he fully expects PyeongChang to stage a successful Olympics.

"I believe in the great strength of our people, since we were successful in hosting the 1988 Seoul Summer Olympics and the 2002 FIFA World Cup," Hwang told the audience.

"All of this wouldn't be possible without the remarkable support of the Korean people, the business community and civil society," Bach said.

"Their support is a sign that Korea will put on a great show. PyeongChang will transform into a hub for Asian winter sports and I am sure these Games will be a fantastic experience for everyone."

Also on Thursday, the first window for the ticket lottery opened online, and the uniform for the torch bearers was also introduced for the first time. 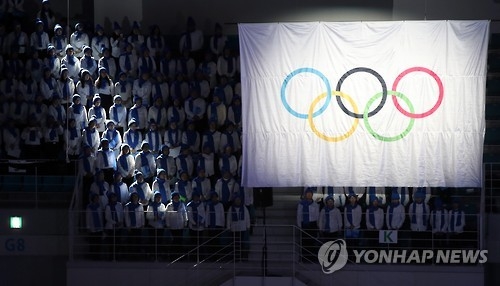