The EIHC is a series of friendly tournaments, held during the international breaks set by the International Ice Hockey Federation (IIHF) in September, November, December and February. The tournaments have mostly taken place in Europe but have also been held in Japan. South Korea is hosting an EIHC event for the first time.

South Korea, ranked No. 23 in the world, went down early on a power-play goal by Emil Kristensen at 15:37 in the first period. South Korea was able to capitalize on a 5-on-3 power play chance late in the opening frame. 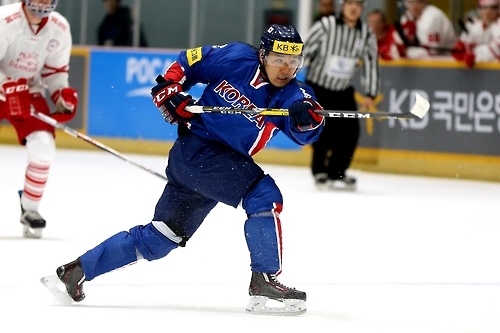 But the home team tied the score at 10:29 in the second period, as Lee Don-ku's slapshot beat goalie Simon Nielsen.

South Korea went ahead with a power-play goal with 58 seconds left in the second peroid, as Kim Won-jun's wrister found the back of the net.

Kim Sang-wook made it 3-1 South Korea at 6:12 in the third period, pouncing on a rebound after Eric Regan's shot on another power play.

Denmark got one back about two minutes later on a goal by Markus Lauridsen, but Michael Swift scored into the empty net for South Korea with five seconds remaining to seal the victory.

Coached by former NHL defenseman Jim Paek, South Korea will next face world No. 19 Hungary on Friday at the same venue.