GANGNEUNG, South Korea, Feb. 9 (Yonhap) -- Over the past decade, Dutch speed skater Sven Kramer has been as dominant in his sport as anyone in any sport. And his form held up in South Korea Thursday, as Kramer claimed his eighth 5,000m crown at the International Skating Union (ISU) World Single Distances Speed Skating Championships in South Korea.

Gangneung Oval in Gangneung, Gangwon Province, is hosting the championships as a test event for the 2018 PyeongChang Winter Olympics. The new arena will stage Olympic speed skating races a year from now, and Kramer will go home with some fond memories of winning yet another 5,000m title.

The man is undefeated in that distance at the world championships. He is also the two-time reigning Olympic champion in the 5,000m and remains the world record holder with 6:03.32.

His time on Thursday wasn't quite as good, but at 6:06.82, he still beat the next fastest skater, countryman Jorrit Bergsma, by nearly three seconds.

"I am pretty satisfied with the race," Kramer said. "I am already looking forward to the next races here."

Kramer is also a force in the 10,000m, which is scheduled for Saturday. He has won four world titles in that event. His 12 individual world championships are a record. 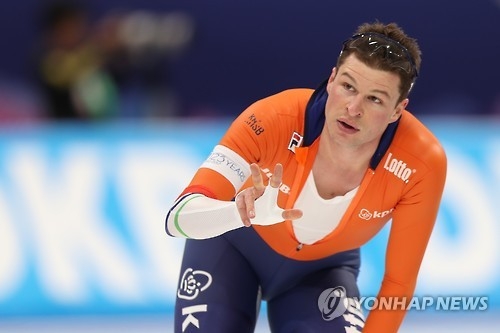 "I didn't have any difficult laps," he said. "The most difficult thing was to stay focused for 12 laps. That's the most important thing to me. With four to five laps to go, I could accelerate and bring laps down to 28 seconds. 6:06 is pretty satisfying."

He and Bergsma have now finished first and second at four consecutive world championships. Though Kramer said Bergsma was "a really strong skater," he also acknowledged that he isn't the only one to contend with when the Olympics rolls around next year.