SEOUL, Feb. 10 (Yonhap) -- The Minnesota Twins' South Korean slugger Park Byung-ho has cleared waivers and has been outrighted to their minor league affiliate.

The Twins said Thursday (local time) that no club claimed Park off the waiver wire, and he has been outrighted to Triple-A Rochester.

The Twins designated Park for assignment last week to make room for pitcher Matt Belisle on their 40-man roster.

Only those with more than three years of service in the majors or those who have been outrighted previously may reject the assignment to the minors and declare free agency. Park made his major league debut last year after signing a four-year deal worth US$12 million in late 2015.

Park is a non-roster invite to spring training. He'll compete with Kennys Vargas for the designated hitter job. 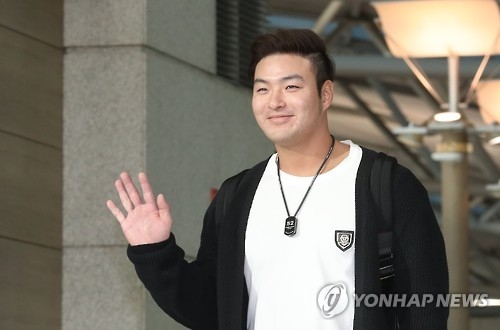 Park had carried some high expectations into his first big league season, having won two MVPs and four home run titles in the Korea Baseball Organization (KBO). He blasted 52 home runs in 2014 and then 53 more in 2015, becoming the first KBO player with back-to-back 50-homer seasons.

Park did flash some of that prodigious power early in 2016, as half of his 12 home runs came in April.

On the flip side, Park struck out 80 times in just 244 plate appearances.