The government confirmed the fourth outbreak at a cow farm Thursday after the first infection was reported last Sunday. It also raised the nation's FMD alert to the highest level and closed all livestock trading markets in a desperate bid to stem its spread.

It is the first time in seven years that the country has issued the highest watch against the FMD virus. In 2010, nearly 3.5 million FMD-infected cows and pigs were culled over nearly six months.

According to the Korea Institute for Animal Products Quality Evaluation, first-class domestic beef changed hands at 17,242 won (US$15.07) per kilogram Wednesday, up 10.2 percent from eight days earlier. The wholesale price of pork also rose 9.9 percent over the cited period to 4,757 won per kg.

Market watchers said that meat prices have climbed for psychological reasons, with some distributors starting to stock up on meat to gird for the full-fledged spread of the disease that affects cloven-hoofed animals, such as cows, sheep and pigs. 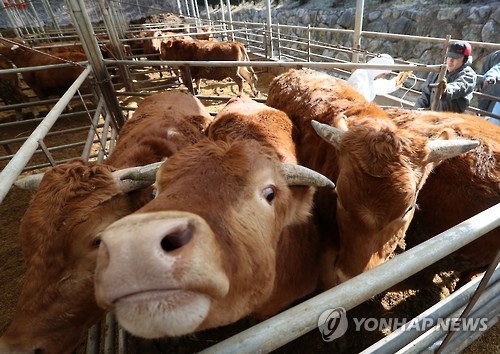 "With FMD likely to spread further, large distributors are showing signs of hoarding beef and pork," a meat purchaser at a large discount store in Seoul said. "That has resulted in the recent price hike."

Industry sources said the upturn in meat prices may go into full gear starting Friday, following the hike in the alert level and closure of the livestock trading market.

The sources voiced concerns that whether FMD spreads to pig farms or not will have a big impact on future pork prices.

South Korea relies on imports from the United States and Australia for more than 50 percent of its beef needs. However, over 90 percent of pork consumed in the country is produced locally.

Large discount stores, meanwhile, saw a low possibility of meat prices soaring in the short term as they have secured stockpiles equivalent to seven to 10 days' supply but said price jumps may be inevitable should the FMD outbreak last long and result in a severe undersupply.

"On top of supply, consumer sentiment has a big impact on meat prices," said an official at the discount store chain Homeplus. "Meat prices could soar down the road, affected by the continued fallout from the nation's worst avian influenza outbreak, as well as the ongoing FMD epidemic." 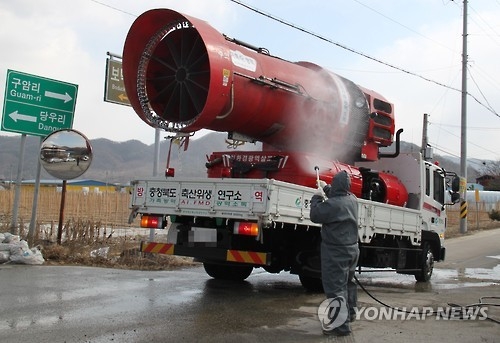