SEOUL, Feb. 10 (Yonhap) -- The national baseball team on Friday unveiled uniforms to be worn by its players at the upcoming World Baseball Classic (WBC).

The Korea Baseball Organization (KBO) said the shirts will come in blue and white, with the word "Korea" emblazoned on the front.

Majestic designed the uniforms, which will be formally presented at the national team press conference in Seoul on Saturday. The team will depart for Okinawa, Japan, on Sunday to set up training camp. The WBC starts on March 6.

The KBO said the jerseys use the same Cool Base technology worn by major league players, featuring a breathable and moisture-wicking material.

Majestic Korea said the uniforms combine classic and modern elements in its design.

They can be purchased online at http://lockerdium.com/event/2017wbc.asp. 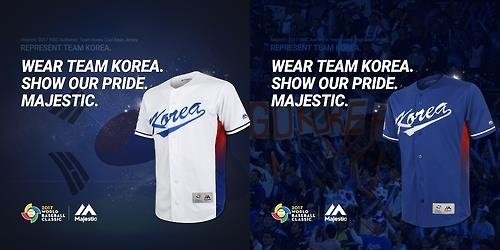