In 2016, Kia Motors sold 58,112 vehicles in Mexico, up 427.3 percent from a year earlier, according to the Korea Trade-Investment Promotion Agency (KOTRA).

Such a sharp increase followed the opening of the company's new production facility there earlier in the year. 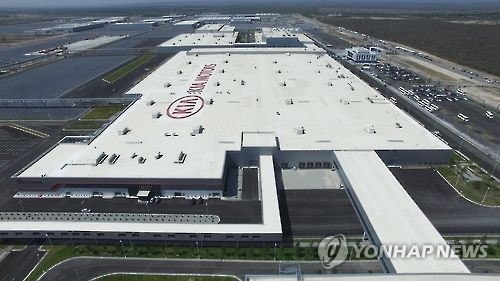 The Mexico plant, Kia's fourth overseas facility, currently has an annual capacity of 300,000 cars, at least half of which were originally meant for American consumers.

Kia has a production facility with an annual capacity of 340,000 cars in Georgia, but the number is not enough to meet the fast growing demand in the United States, the world's second-largest market for Kia and its larger affiliate Hyundai Motor Co.

The new plant in Mexico, however, quickly became a new source of a headache after new U.S. President Donald Trump proposed a 35 percent import tax on all cars produced outside of the U.S.

Should the U.S. begin imposing such high tariffs on imported vehicles, a large number of vehicles produced in Mexico could be left stranded.

Market observers believe the rise in sales in Mexico and other Central and South American countries may offer a solution to Kia.

Also in Mexico, Kia's sales again jumped 85.9 percent to 5,780 cars in January, according to data released by the Mexican Automotive Industry Association.

"Mexico has signed free trade agreements with over 40 countries, meaning there are many new markets Kia could explore under the benefits of Mexico's FTAs," a KOTRA official said, speaking on condition of anonymity.