SEOUL, Feb. 10 (Yonhap) -- Lee Kun-hee, the chief of South Korea's top conglomerate Samsung Group, retained his No. 1 spot on the list of annual dividend income earners for the eighth consecutive year last year, according to regulatory documents on Friday.

Samsung Electronics paid 137.4 billion won in dividends to Lee, who owns a 3.38 percent stake in the electronics giant, last year. 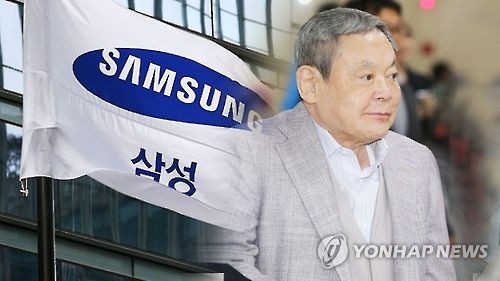 Lee Jae-yong, vice chairman of Samsung Electronics and the only son of the Samsung Group chief, who has been hospitalized since 2014 following a heart attack, came fifth with 46.8 billion won in dividend earnings last year.

Some analysts said shareholders in South Korea are unhappy with what they saw as a paltry dividend.

A projected dividend yield rate of South Korea's listed firms lagged far behind that of foreign companies listed on other advanced and emerging markets, according to a brokerage.

Of 24 advanced and emerging markets, South Korea's rate was ranked 22nd, according to the data.
(END)