SEOUL, Feb. 10 (Yonhap) -- South Korea's science ministry opened a new complex in western Seoul on Friday to nurture the virtual reality (VR) and augmented reality (AR) industry as the country aims to become a global powerhouse in the sectors.

The so-called "KoVAC" is located at Digital Media City (DMC), a high-tech complex in western Seoul, to accommodate various VR and AR companies, the Ministry of Science, ICT and Future Planning said. 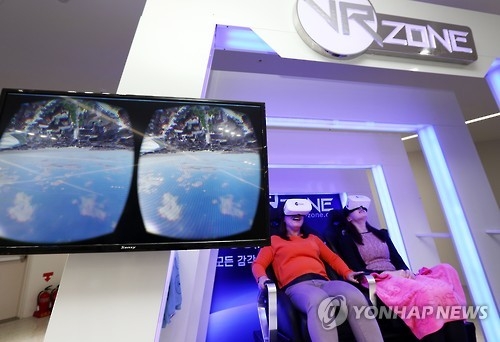 The complex is part of the government's broader plan to invest more than 400 billion won (US$358 million) over the next four years in developing new and indigenous VR and AR technologies, and narrow its technology gap with global leaders.

"The government will make utmost efforts in supporting our developers and companies so that they can advance to the global market," Choi Jae-you, vice minister of science, ICT and future planning, said in an opening ceremony.

At the KoVAC, the ministry set up an open space where companies and research centers can freely gather to develop the latest VR content, the ministry said.

Select start-up companies will work with major electronics companies to develop content that can be used on the latest VR devices and applications, officials said.

Also, a VR experience zone will be set up, the ministry said, adding that it is in discussions with major tech firms to establish it.

At the so-called VR campus, the ministry aims to train more than 2,200 VR experts, with 20 more campuses to be built across the country by 2020.