SEOUL, Feb. 10 (Yonhap) -- South Chungcheong Gov. An Hee-jung has closed in on frontrunner Moon Jae-in in the race for the presidency, narrowing the gap between the opposition hopefuls to 10 percentage points, a survey showed Friday.

The poll, conducted by local pollster Gallup Korea from Tuesday and Thursday, showed Ahn with 19 percent support, up 9 percentage points from a week earlier, while Moon, a former leader of the main opposition Democratic Party, scored 29 percent, down 3 percentage points.

An's rise as a promising potential presidential contender came after former U.N. Secretary-General Ban Ki-moon announced his decision on Feb. 1 to opt out of the presidential election this year. 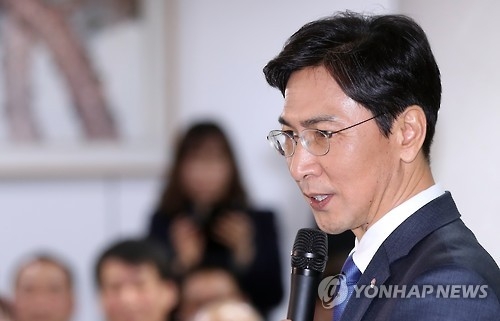 In the latest survey, Acting President and Prime Minister Hwang Kyo-ahn garnered 11 percent, a gain of 2 percentage points, followed by Seongnam Mayor Lee Jae-myung with 8 percent and Ahn Cheol-soo, a former chair of the minor opposition People's Party, with 7 percent.

By party, the Democratic Party secured the backing of 40 percent of people polled, a decline of 1 percentage point, while approval numbers for the ruling Saenuri Party and the People's Party stood at 13 percent and 12 percent, respectively.

The weekly survey was conducted on 1,007 South Korean voters across the country. Its margin of error is plus or minus 3.1 percentage points.