Lee Joon-sik made the remark in a public address at the government complex in Seoul following the Jan. 31 unveiling of the final version of the controversial textbooks for middle and high school students.

"The so-called Korean Teachers and Education Workers Union (KTU), and certain civic groups should immediately stop actions that violate the freedom of individual schools to choose textbooks," he said. "(The KTU) has been visiting schools that have decided to adopt the state-authored history textbooks and put pressure on them to disrupt the use of the textbooks and heighten confusion at schools." 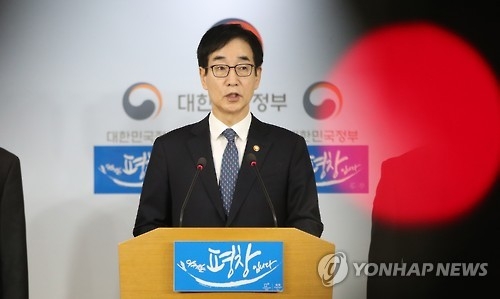 "Should there be illegal and unfair cases, such as the disruption of schools' normal running of curricula, I make clear that (the government) will take all possible legal measures," the minister added, citing charges of housebreaking or obstruction of duty.

The state-authored textbooks were reintroduced by the conservative Park Geun-hye administration after more than a year of wrangling between liberals and conservatives over their interpretation of modern history.

Liberals denounced them as an attempt to glorify the military rule of Park's father, Park Chung-hee, while the conservatives viewed existing textbooks by private publishers as biased, left-leaning and lenient toward North Korea.

Lee's warning followed revelations that no school had applied to adopt the textbook in the new academic year starting in March despite the government's offer of merit points for teachers and a 10 million-won (US$8,700) subsidy per school. This week, the government extended the application deadline from Friday to next Wednesday.

"Some education offices are not even passing down the necessary official documents to individual schools to deprive them even of the opportunity to choose whether or not to use the state-authored history textbooks," Lee said. "I strongly urge eight education offices, including those of Seoul and Gyeonggi Province, to deliver the documents to constituent schools by today."

The textbooks are to formally go into use next year following a trial period at schools that volunteer to use them. There are 17 education offices in the country.

The minister claimed the government "did its best" to resolve the controversy, such as by unveiling draft versions on the Internet for the first time.

"We initially thought about 20 percent of schools would apply, but we will go ahead even if there is only one," he said.

The KTU lambasted the minister for his remarks and scheduled a press conference for later in the day. The country's largest teachers' union has been labeled "progressive" and outlawed for refusing to deny membership to fired teachers.

"The so-called chief of the education ministry is talking about the so-called KTU and conducting false propaganda," it said.