SEOUL, Feb. 10 (Yonhap) -- With her impeachment trial seen heading into the homestretch, attention is centered on whether President Park Geun-hye will appear at the Constitutional Court to make her case in person.

Some of her aides believe her oral argument to deny a string of corruption charges -- cited in the parliamentary impeachment resolution -- could influence the court's judgment in her favor and help placate negative public sentiment.

However, there are some who still argue the president must stay above the messy process of appearing in court and touching on the allegations of illegal action, which she has called a "colossal mountain of preposterous lies."

Park was impeached by parliament in December over the corruption scandal involving her and her friend Choi Soon-sil.

The top court may make its ruling to determine whether to unseat or reinstate the president before March 13 when another justice retires and creates another vacancy on the already short-handed bench.

On Thursday, the court ordered the parliamentary impeachment panel and Park's legal representatives to submit the "final" summaries of their cases by Feb. 23, raising the possibility of a ruling being handed down before Acting Chief Justice Lee Jung-mi leaves office.

Observers say that Park may decide to take the stand depending on her reading of the overall situation, particularly regarding the progress in the corruption probe led by Independent Council Park Young-soo.

Special prosecutors are expected to question Park as early as next week over the corruption scandal. The outcome of the questioning could also affect Park's decision to appear before the court, observers noted. 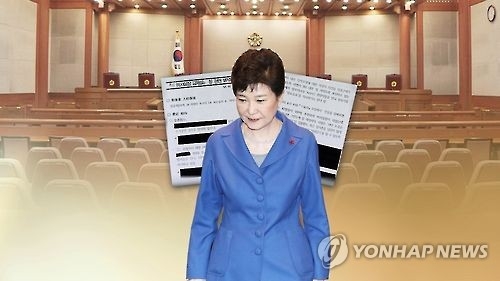