Kim scored 45.51 points with a back lay jump performance. Although she didn't make it into the next round, where the top 12 finishers perform, the South Korean was pleased with her result in her first FIS World Cup.

"I'm happy, and I'm satisfied with my performance out there," she said. "I thought I would take last place, but I didn't."

Kim was originally an artistic gymnast but decided to switch to aerials last summer. With little experience in aerial skiing, Kim was the only skier who went for a back lay jump, which has the least degree of difficulty (DD) at 2.050. 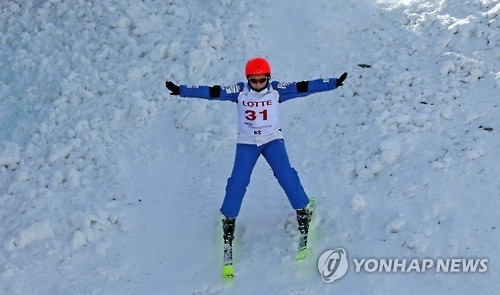 She was also the only skier to jump off from the smallest kicker, at 1.85 meters high, which is more than a half size smaller than that of the largest kicker, at 4.15 meters.

While other skiers struggled with their landing, Kim, however, executed her aerial tricks well and pulled off a safe landing to earn 7.4 landing points, good for 12th.

Kim lamented that she couldn't perform better in front of home fans.

"I was a little nervous because I picked up an injury during my practice yesterday," she said. "I tried to execute my move perfectly, but because of the injury, I just thought about finishing my performance without getting hurt."

For the qualification round, Liubov Nikitina of Russia finished first at 89.53, followed by Zhang Xin of China at 88.20.

However, other top class skiers like Ashley Caldwell of the United States, the overall World Cup winner in the 2016 season, and Lydia Lassila, the 2010 Vancouver Olympic gold medalist, failed to make the cut.

Kim said competing with the top skiers at the same stage is already meaningful.

"Watching their performances with my own eyes is already a big lesson," she said. "I will try to improve my techniques and show better performances at the PyeongChang Olympics next year."