SEOUL, Feb. 10 (Yonhap) -- All of the 15 Samsung Group affiliates that were members of the business interest organization Federation of Korean Industries (FKI) have pulled out as of Friday, group officials said, acting on a pledge by the conglomerate's de facto heir to clean up after a major political scandal.

Samsung Electronics, the pillar of the Samsung Group, was among the first to submit its withdrawal on Monday. The group's security solution provider S-1 Corp. was the last to submit the papers late Friday, officials said.

The 15 subsidiaries accounted for a quarter of the annual membership fees collected by the FKI with approximately 13.3 billion won (US$11.54 million).

Samsung companies have been deeply implicated in a scandal surrounding President Park Geun-hye and her close friend Choi Soon-sil, who are suspected of forcing leading business groups to make donations to sports and culture foundations controlled by Choi through FKI. Samsung allegedly made the donations in exchange for a smooth and cost-favorable merger of two of its affiliates as the groundwork for the group's heir apparent Lee Jae-yong to solidify his grip on the conglomerate.

Grilled with criticism at a parliamentary audit on the scandal in early December, Lee had said Samsung will withdraw from FKI.

LG Group was the first among the nations' top 4 business groups to bolt from the organization by pulling out on Dec. 27. 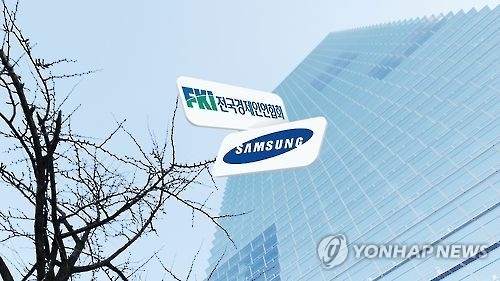