"In order to make a breakthrough for the economy, we have to change the fundamentals of our economy through strong structural reform," Finance Minister Yoo Il-ho said in a keynote speech at a Seoul symposium. "We cannot avoid the demand for restructuring. We have to push for it as its achievement leads to the next government and generation."

The South Korean government has been working on reforming its social and economic structure in a bid to seek a new growth engine, as the country seems to be trapped in low growth stemming from rapidly aging population.

It drives forward with corporate restructuring to sort out shaky sectors such as shipbuilding, steelmaking, shipping and petrochemicals that have been suffering from massive losses due to a global slowdown and contracting demand.

Yoo said the country has to get fully prepared to spearhead the fourth industrial revolution that the world economy is now facing.

"We have to improve growth potential through deregulation and innovation of industries for domestic demand," said Yoo. "It is impossible for a country to take the lead when it loses timing."

For this year, the top economic policymaker said the South Korean government will maintain an expansionary policy to deal with the possible impact of the restructuring and rising uncertainties at home and abroad this year.

"We may see our growth momentum weaken if weak consumer sentiment and ongoing corporate restructuring cause a slump in domestic demand," said Yoo. "The government will do its best to continue fiscal expansion in a way to boost consumption and investment.

South Korea will likely grow some 2.5 percent in 2017, down slightly from 2.7 percent for the previous year, due mainly to contracting global demand amid widespread trade protectionism. 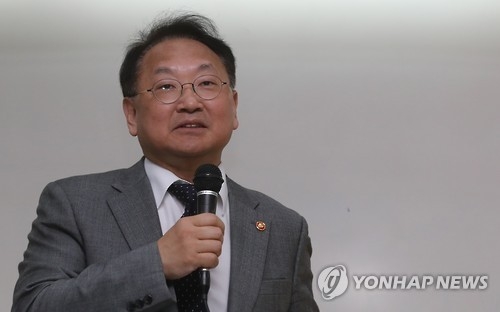