SEOUL, Feb. 10 (Yonhap) -- The weekly rallies over President Park Geun-hye's impeachment are expected to heat up this weekend as the Constitutional Court is seen to accelerate its review of the landmark case.

Park's critics have organized mass rallies each Saturday to demand her immediate resignation over a corruption scandal centered on the chief executive and her friend Choi Soon-sil. The president's supporters have countered by launching their own campaign to call for her reinstatement. 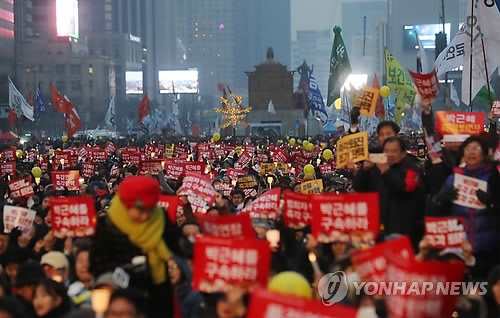 In total, millions of South Koreans have taken to the streets of central Seoul since the scandal broke in late October.

On Saturday, Park's critics, characterized by their peaceful candlelight vigils, will open their 15th rally on Gwanghwamun Square at 6 p.m. with calls for Park's removal within the month, according to organizers.

They will also demand an extension of a special prosecutors' investigation into the alleged irregularities ahead of the Feb. 28 deadline and the joint resignation of acting President and Prime Minister Hwang Kyo-ahn.

The top court has until early June to decide whether to unseat or reinstate the president.

The court has also indicated its resolve to finalize the proceedings before March 13, the retirement date of acting Chief Justice Lee Jung-mi, because her departure will create another vacancy in the nine-member bench following the retirement of Chief Justice Park Han-chul last month.

Reflecting this, the court ordered Park's lawyers and the parliamentary impeachment panel Thursday to each submit a final summary of their arguments by Feb. 23. 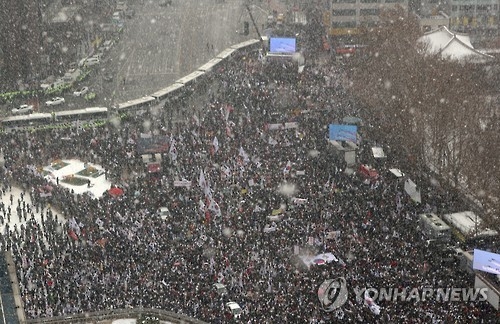 Meanwhile, Park's supporters, marked by their waving of the Korean flag, will descend on the streets outside City Hall at 2 p.m. Saturday to stage their 12th rally.

Organizers said they will call for the court's rejection of the impeachment and the dissolution of the special prosecutors' team, which they have accused of being swayed by the "false" and "fabricated" charges leveled by the biased press and pro-North Korea forces.

The flag-waving crowd have even started calling on authorities to expand the investigation to check "suspicious activities" of Choi's associates, whom they argued "rigged the evidence" that triggered the entire impeachment process.

Rival political parties urged members to turn up in larger numbers as presidential hopefuls from both the ruling party and main opposition Democratic Party moved to rally public support ahead of a presidential by-election that would take place within 60 days of Park's removal. If she is reinstated, the election will be held in December as scheduled.

The minor conservative Bareun Party, however, expressed a cautious attitude toward joining the rallies, saying its job was to impeach the president and the rest should be left to the court.