Lee finished second among 24 skaters with her season best time of 37.48 seconds at the International Skating Union (ISU) World Single Distances Speed Skating Championships at Gangneung Oval in Gangneung, Gangwon Province. Some 230 kilometers east of Seoul, the new arena is hosting its first international competition as a test event for the 2018 PyeongChang Winter Olympics.

Lee, the two-time reigning Olympic gold medalist and three-time world champion in the 500m, has struggled all season with a calf injury. She has gone winless in five ISU World Cup events this season, but picked up her seventh career world championships medal with a strong effort.

Nao Kodaira of Japan, who has gone undefeated in six World Cup races this season, won the gold in 37.13 seconds, her new personal best and the Japanese national record. 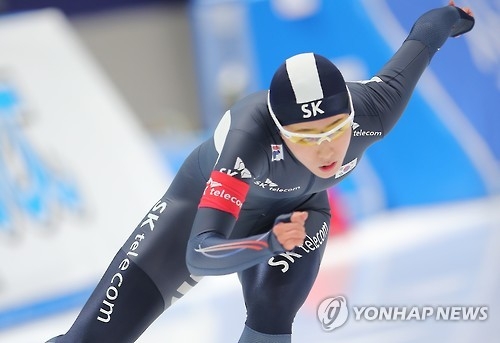 Friday's result bodes well for Lee's chances at the Asian Winter Games starting next week in Sapporo, Japan. Lee, who still holds the 500m world record with 36.36 seconds, will again have to contend with the likes of Kodaira and Yu.

"Compared to some earlier events this season, I had a lot of fun getting ready for this competition," she said. "I am happy to post up such a strong time. I've skated poorly at World Cup events, but I was able to put that behind me and focus on this race."

Two other South Koreans finished out of medals, as Park Seung-hi, former Olympic short track champion competing in speed skating, ranked 18th at 38.52 and Kim Min-sun finished in 15th in 38.43.