Kim Nam-jeen and Yoon Gi-chan failed to qualify for the men's aerials finals at the FIS Freestyle Ski World Cup in PyeongChang, Gangwon Province, some 180km east of Seoul. Kim finished 24th, while Yoon ended up 31st among the 32 skiers who competed at Phoenix Snow Park. They both missed the finals, open only to the top-12 finishers.

Chinese skiers swept the top three spots in the qualification round, with Qi Guangpu, currently the leader in World Cup rankings this season, finishing first with a score of 127.60. The men's finals will be staged later in the day.

Both South Koreans said they could have performed better, although Kim was satisfied with his overall performance.

"I've made some landing mistakes in my practice session, but this time I'm happy that I didn't make a big mistake," Kim said.

Kim, who started aerial skiing in October 2015, said he learned lots of things from the world's top athletes. The World Cup in PyeongChang featured all medal winners from the 2014 Sochi Winter Olympics.

"I usually watched Chinese skiers' performance, but this time, it was nice to see skiers from other countries," Kim said. "Personally, I like Qi's performance, and one day I want to be a top-class athlete like him. I will improve my techniques and will try to get good results at the Olympics next year."

For Yoon, it was a poor finish, as he struggled with his landings. In aerials, 30 percent of the skier's score is based on the landing, while the athletes' jump form accounts for 50 percent and jump takeoff 20 percent.

"I know I have a long way to go compared to top class skiers here," he said. "I will fix my landings from the start, and will try to perform better at the Olympics." 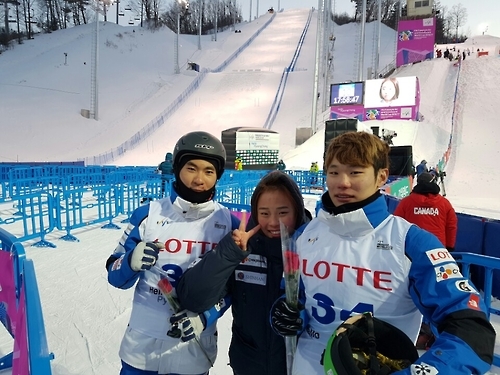