GANGNEUNG, South Korea, Feb. 10 (Yonhap) -- The secret to South Korean Lee Sang-hwa's success at the speed skating world championships Friday was rather straightforward: sticking to her own race plan.

Lee took the silver medal in the women's 500m at the International Skating Union (ISU) World Single Distances Speed Skating Championships at Gangneung Oval in Gangneung, Gangwon Province. Lee finished her race in 37.48 seconds, her fastest time in what has been a trying, injury-plagued season.

This was Lee's seventh career medal at the world championships. She is the two-time reigning Olympic champion and the world record holder (36.36) in the 500m.

Nao Kodaira of Japan, the world No. 1 in the 500m this season with six consecutive ISU World Cup victories, won Friday's race in 37.13 seconds, her new personal best and also a new Japanese record.

Despite coming up short against her Japanese rival, Lee said she was still satisfied with her result.

"I am happy because I was able to meet my own expectations," she said. "I've skated poorly at World Cup events (with no victories in five starts), but I was able to put that behind me and focus only on this race."

Lee said she was particularly pleased with her start and her first 100m lap time. She crossed the 100m line in 10.32 seconds, the second fastest in the field of 24 skaters. 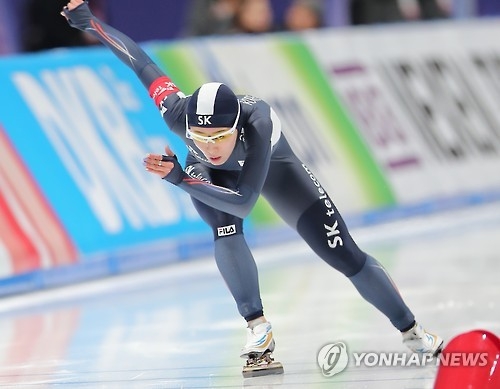 "Whenever I've trailed after the first 100m, I've tended to rush my race," Lee said. "Today, the skater next to me (Maki Tsuji of Japan) was pretty fast, but I didn't panic and stuck to my own plan."

The new arena, some 230 kilometers east of Seoul, is hosting the world championships as a test event for the 2018 PyeongChang Winter Olympics. Lee will go for her third straight gold medal a year from now, hoping to match Bonnie Blair of the United States, the only female skater to win three straight Olympic 500m gold medals.

Lee has the Asian Winter Games coming up next week in Japan, where she will once again go up against Kodaira, but the South Korean is eyeing a bigger prize.

"I still have lingering pains in my calf and I am getting treatments as I prepare for the Asian Games," Lee said. "But I have an even bigger event next year. Rather than the Asian Games, I want to keep my focus on the Olympics."

And Lee got a little taste of the Olympics Friday, with the partisan fans cheering her on from start to finish at Gangneung Oval.

"With so many Korean people on hand, I had a lot of fun getting ready for this race," Lee said.