(ATTN: UPDATES throughout with skater's condition)
By Yoo Jee-ho

Lee lost his balance trying to turn a corner and fell in the latter stage of the men's team pursuit race at the International Skating Union (ISU) World Single Distances Speed Skating Championships at Gangneung Oval in Gangneung, Gangwon Province.

Lee, who helped South Korea to the team pursuit silver at the 2014 Sochi Winter Olympics, cut his right leg with his own left skate. He stayed on the ice for a few minutes to receive treatment on his injured leg, and was later stretchered off the ice. 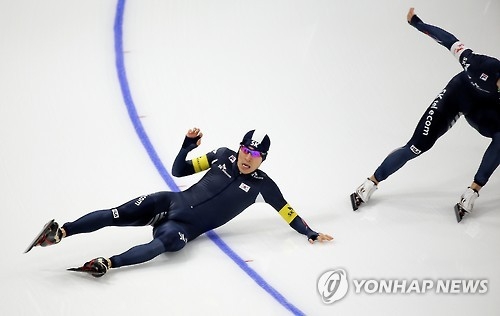 According to an official from the Korea Skating Union (KSU), Lee's injury required eight stitches. Though he didn't suffer any structural damage, the injury will still rule him out of the mass start on Sunday.

Lee, a former Olympic 10,000m champion, is the current world No. 1 in mass start. Lee's status for the Asian Winter Games, set to start on Feb. 19 in Sapporo, Japan, also remains murky.

He and his two teammates, Joo Hyong-jun and Kim Min-seok, had been considered a medal hopeful in the team pursuit here. They won a silver and a bronze in three ISU World Cup team pursuit races this season to rank sixth overall. 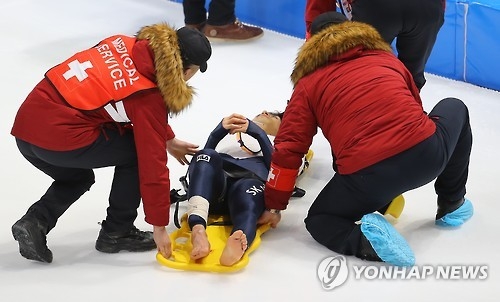 The Netherlands has swept up five gold medals in six events after two days of competition here.