In a week-long trip to Europe that begins Feb. 16 (local time), Foreign Minister Yun Byung-se plans to attend the talks of foreign ministers from the Group of 20 (G-20) countries in Bonn from Feb. 16-17 and the 53rd Munich Security Conference in Munich from Feb. 17-19, the foreign ministry said in a statement.

"When he meets his European counterparts in the talks, Minister Yun will underscore that this is the last possible time to prevent North Korea from going nuclear," a ministry spokesman said.

To achieve the aim, the minister is expected to present strategies and a road map to diplomats in Europe, he said. 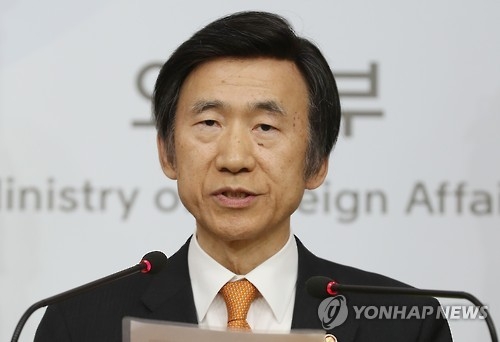 On the sidelines of the two international meetings, South Korea is finalizing arrangements for one-on-one sideline talks between Yun and his counterparts in the United States, Japan and China, the statement said.

Yun also plans to attend the ninth annual meeting of the group of five middle powers, dubbed MIKTA based on the initials of their names -- Mexico, Indonesia, Korea, Turkey and Australia, it said.

From Feb. 19-22, he is scheduled to have separate meetings with his counterparts in Romania and Britain.

"Minister Yun's participation in the G-20 diplomats and security meetings and even visits to Romania and Britain clearly show the government's diverse efforts to seek support and cooperation in coping with the North's evolving nuclear and missile threats," he said.

North Korea conducted two nuclear tests and a series of missile launches last year, resulting in heightened tensions on the Korean peninsula and in the region.

S. Korea's top diplomat to ask for pressure on N.K. in Europe next week

S. Korea's top diplomat to ask for pressure on N.K. in Europe next week