The EIHC is a series of friendly tournaments, held during the international breaks set by the International Ice Hockey Federation (IIHF) in September, November, December and February. The tournaments have mostly taken place in Europe but have also been held in Japan. South Korea is hosting an EIHC event for the first time.

South Korea will wrap up the four-nation tournament against Japan on Saturday. Hungary is leading the way with two straight wins, while Japan is in last place with two losses. 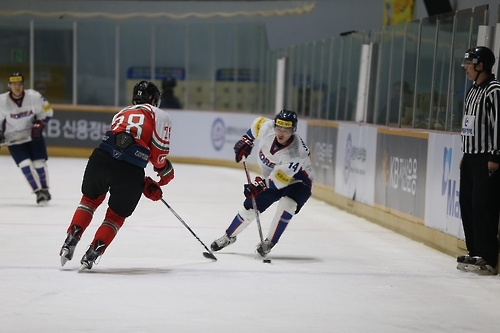 South Korea still opened the scoring on a power-play goal by Jeon Jung-woo at 6:29 in the first period, but then Hungary went to work.

Krisztian Nagy tied the score with a power-play marker of his own 1:02 after Jeon's score.

Then Hungary poured in three goals in the second period in less than two minutes, with Vilmos Gallo, Csanad Erdely and Nagy each scoring an even-strength goal.

Shin Sang-hoon got one back for South Korea at 10:40 in the third, but Gallo further put the game out of reach with his second goal of the night at 15:43.

Gallo two goals and an assist, while Erdely scored once and set up two goals for Hungary.