More than 50 aerial skiers from around the world visited PyeongChang, Gangwon Province, some 180km east of Seoul, to compete at the International Ski Federation (FIS) Freestyle World Cup. The FIS competition is one of the test events for the PyeongChang Winter Olympic Games.

After practicing and performing at Phoenix Snow Park, the venue for the freestyle skiing and snowboard events at the Olympics, the skiers who visited PyeongChang for the first time said they are looking forward to coming to the alpine town again next year.

"It's just really awesome to be here and get to see what PyeongChang is all about," said Kiley McKinnon, the 21-year-old American who was the 2015 overall World Cup champion. "Facilities on the course are really good. I think they (organizers) have been doing a great job."

David Morris, who won the silver medal at the 2014 Sochi Winter Olympics in the men's aerials, said there are still small things to be fixed here, but since the organizers have one year left to complete the job, the Australian expects a great Olympics next year.

"I like the city and I like the people here," he said after finishing his qualification round. "This is a good setup for next year."

Morris, who finished 23rd among 32 skiers because of a poor landing, said the organizers should work a little bit on the landing hill, though it's not a major problem.

Ashely Caldwell, the overall World Cup title holder for the 2016 season, said she is satisfied with the site, but had a little problem with the wind.

"It's windy here, and that's difficult for aerials," she said. "But you can't change the wind."

Caldwell, No. 5 in World Cup points rankings this season, added that she was really excited to see fans watching the event.

"I think it's awesome that South Korea is coming out for aerials," she said. "The Olympics should be a fun atmosphere. It looks like everyone here is excited." 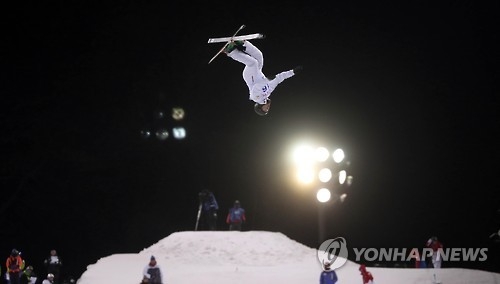