Trump made the remark during a joint news conference with Japanese Prime Minister Shinzo Abe at the White House, reaffirming the U.S. security commitment to defending the ally.

"We will work together to promote our shared interests, of which we have many, in the region, including freedom from navigation and of navigation and defending against the North Korean missile and nuclear threats, both of which I consider a very, very high priority," Trump said.

The remark underscores the seriousness with which Trump takes the ever-growing threats from the North that has conducted five nuclear tests and a number of ballistic missile launches in pursuit of a nuclear missile capable of reaching the U.S.

Friday's talks took place amid tensions heightened after North Korean leader Kim Jong-un said in his New Year's Day address that the country has entered the final stage of preparations to test-fire an intercontinental ballistic missile.

In response to the ICBM threat, Trump pledged last month to stop the North from mastering such ICBM capabilities, saying that the North's development of a nuclear missile capable of striking the U.S. "won't happen," though he didn't say how he will prevent it. 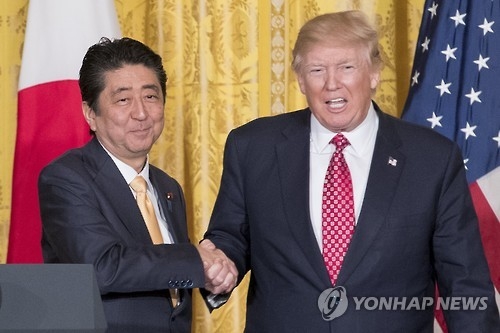 Friday's meeting was also a focus of attention in South Korea because Trump's policy on Japan is likely to be similar to that on South Korea, especially on security and alliance issues, such as cost-sharing for American troops in the two countries.

During the campaign, Trump portrayed alliances as something the United States can abandon unless they make economic sense and he urged allies, such as Japan, South Korea and NATO countries, to pay more for American troops stationed in those countries to help protect them.

On Friday, Trump called Japan an "important and steadfast ally" and even thanked Abe and "the people of Japan for hosting our armed forces," a stark departure from his campaign rhetoric that the U.S. should be prepared to pull troops out of Japan and South Korea unless they pay more for the troops.

Trump also said the alliance with Japan is the "cornerstone" of peace and stability in the region.

"It is important that both Japan and the United States continue to invest very heavily in the alliance to build up our defense and our defensive capabilities which, under our mutual leadership, will become stronger and stronger, and as time goes by, ultimately they will be impenetrable." Trump said.

On the economy, Trump said the two countries will seek a trading relationship that is "free, fair and reciprocal, benefiting both of our countries."

It was Trump's second face-to-face summit with a foreign leader since taking office after the first with British Prime Minister Theresa May last month, though Abe met with Trump when he was president-elect in November days after the election.

After the summit, Trump was to take Abe to his Florida resort, where they will play golf Saturday. The White House said the invitation is a testament to the "importance the United States places on the bilateral relationship and the strength of our alliance and the deep economic ties."