The search for a new chairman follows the withdrawal of membership by key conglomerates, including Samsung Group and Hyundai Motor Group.

The two and many others have quit the organization with over 50 years of history after they came under public criticism for making illicit, or at least inappropriate, donations to two sports foundations controlled by Choi Soon-sil, a close friend of President Park Geun-hye who is now in custody while facing bribery and influence-peddling charges that have also led to the impeachment of the president.

Failure to find a new FKI chairman could very well lead to the collapse of the business lobby amid a continue departure of its 600 members, the sources noted.

Huh's three-year term ends at the end of this month. 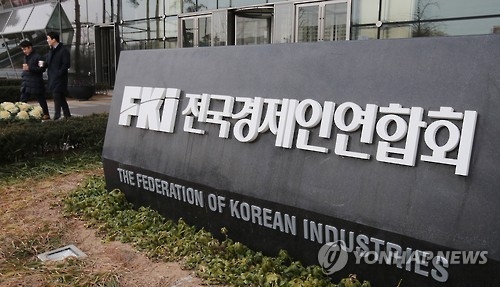 According to the sources close to FKI workings, Samsung, Hyundai and two other conglomerates -- SK Group and LG Group -- that have already quit the FKI had accounted for nearly half of about 50 billion won (US$43.5 million) the FKI collects each year in membership fees.

"The FKI will have no choice but to greatly reduce its spending this year as it will have so much less in membership fees due to the departure of those key member firms," a source said, while speaking on condition of anonymity.

The most urgent task of the new chairman, therefore, will be to keep the remaining members from leaving the organization, they noted.

The problem, however, is that it will be difficult to find a new person to head the organization that has come to be considered nothing but a stick for the government following the corruption scandal. It is believed to have coerced nearly 80 billion won from its members in donations for the two sports foundations -- Mir and K-sport.

Still, Huh himself is said to be personally speaking to possible candidates in a bid to keep the organization from falling apart.

The FKI is expected to hold its annual assembly later in the month, at which it will seek to name its new chairman.
(END)