Park's critics have organized mass rallies each Saturday to demand her immediate resignation over a corruption scandal centered on the president's long-time confidante Choi Soon-sil. Her supporters have countered by launching their own campaign to call for her reinstatement.

Park's critics, characterized by their peaceful candlelight vigils, will open their 15th rally in Gwanghwamun Square at 6 p.m. with calls for Park's removal within the month, according to organizers. 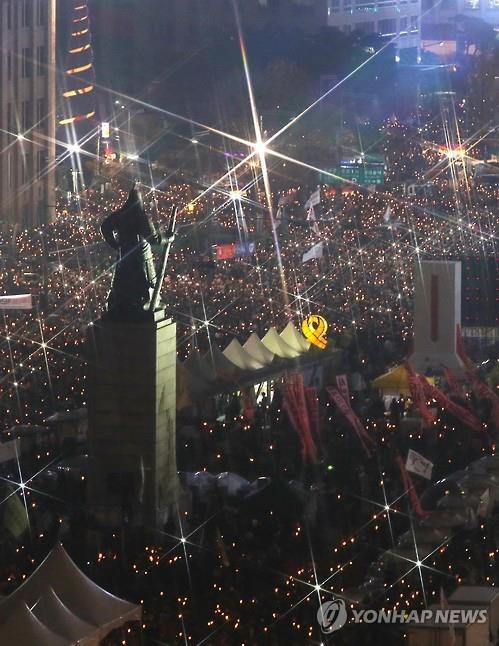 Moon Jae-in, a former leader of the main opposition Democratic Party who has maintained a comfortable lead in recent polls, is scheduled to attend the candlelight vigil after meeting supporters in Daegu, located some 300 kilometers south of Seoul.

An Hee-jung, governor of South Chungcheong Province and the runner up in recent polls, is scheduled to meet supporters in Gwangju and later visit an anti-Park vigil scheduled to be held in the city located 329 kilometers southwest of the capital.

Lee Jae-myung, mayor of Seongnam city and a declared presidential hopeful, will attend the pro-impeachment rally in Seoul, which is also expected to attract Park Jie-won, head of the splinter People's Party, and the party's newly joined opposition heavyweight Sohn Hak-gyu. 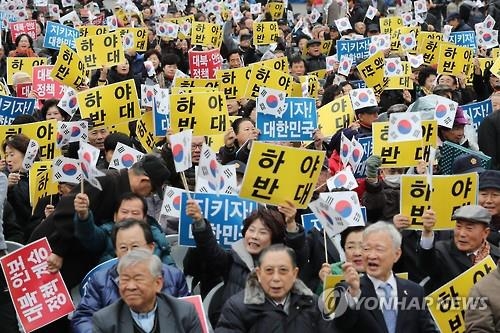 Park's supporters, marked by their waving of the Korean flag, will occupy streets outside of Seoul City Hall from 2 p.m. to stage their 12th rally.

Organizers said they will call for the court's rejection of the impeachment and the dissolution of the special prosecutors' team, which they have accused of being swayed by "false" and "fabricated" charges leveled by biased press and pro-North Korea forces.

The ruling Saenuri Party's Rhee In-je, a former lawmaker of six terms now running for the party's presidential candidacy, said he will attend the pro-Park rally "to be part of the patriotic people's wave."

Kim Moon-soo, former Gyeonggi Province governor, also decided to throw support for the pro-Park rally, saying, "if the taegukki (Korean flag) rests, the country will burn from the candle and move to the left."

The minor conservative Bareun Party, however, expressed a cautious attitude toward joining either rally, saying its job was to impeach the president and the rest should be left to the court.