Gracenote said South Korea will grab six gold, three silver and one bronze medals in its latest Virtual Medal Table, updated with about a year to go until the 2018 PyeongChang Winter Games to be held on South Korea's east coast.

The projected gold medal total would tie South Korea's previous record at a Winter Games. The country won half dozen gold medals in 2006 and again in 2010.

For PyeongChang 2018, South Korea's goal is to win at least eight gold medals and 20 medals in total to rank fourth overall. The country's highest position on the Winter Olympics medal standings was fifth at Vancouver 2010, where it won six gold and 14 medals in total.

By sports, Gracenote predicted South Korea will claim all six gold medals on the ice -- three in short track and three more in speed skating. 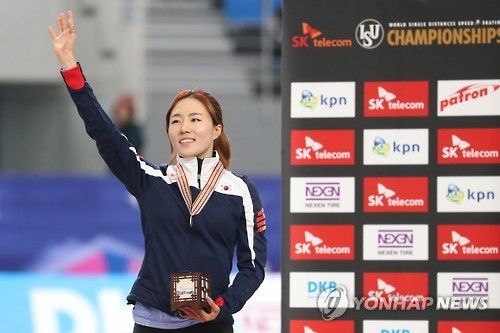 Lee Sang-hwa is projected to win her third straight gold in the women's 500m speed skating. Lee Seung-hoon and Kim Bo-reum were projected as the gold medalist in the men's and women's mass start, respectively.

Two more silver medals will come from short track, Gracenote said, and one other silver will be won by Yun Sung-bin in men's skeleton. It would be South Korea's first Olympic medal in a sliding event.

Shim is also projected to add a bronze in the 1,000m in short track. Shim won three medals, including a relay gold, at her Olympic debut in 2014.

By Gracenote's projection, Norway will win the medal race with 15 gold medals, followed by Germany with 13 and the United States with 10.