According to the Ministry of Agriculture, Food and Rural Affairs, the country has culled 33.12 million animals as of Friday. The number is already more than double the previous record of 13.96 million destroyed in a 2014 outbreak. 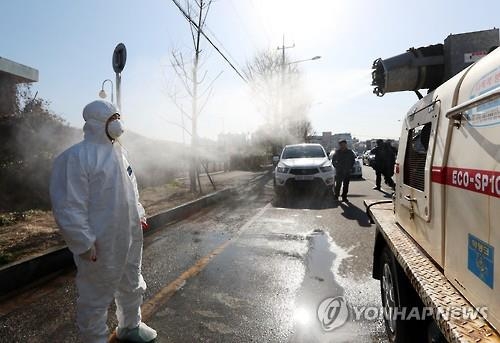 The first case in the latest outbreak was reported at a chicken farm in Haenam, about 420 kilometers south of Seoul, on Nov. 16. It was caused by the highly pathogenic H5N6 bird flu strain.

After ravaging some 340 poultry farms nationwide, the outbreak appeared to subside around early February.

But it resurfaced on Monday at a poultry farm in Gimje, North Jeolla Province, some 260 kilometers southwest of Seoul.

The latest AI case came as the country was also grappling with the spread of foot-and-mouth disease (FMD), first reported on Feb. 5 in North Chungchong Province's Boeun, some 180 kilometers south of Seoul.

More FMD cases were later reported at farms in Jeongeup, located 260 kilometers south of Seoul in North Jeolla Province, and in Yeoncheon, 62 kilometers north of Seoul and near the border with North Korea.

By law, the central government shoulders 80 percent of the cost, with local governments responsible for the remaining 20 percent.

Despite this arrangement, local governments are asking the central government to increase its share of costs, citing additional burdens from the FMD outbreak.

"The situation is dire to the point where talks are floating on whether we should announce a moratorium as our budget might run out after paying for preventive measures and providing compensation," a local government official, who wished to remain anonymous, said.

"The central government should shoulder more. Sticking to the current cost-sharing arrangement in light of a nationwide disaster would add a big burden to local governments' financial health," the official added.