Park, who won two gold medals in short track at the 2014 Winter Olympics, switched to long track later that same year. While she's been struggling to find her footing in the new sport -- without any notable victory in speed skating -- Park said she's learned to appreciate small accomplishments along the way.

And breaking her personal best time in the 500m on Friday is one of them.

"I was sick before the competition, and so I didn't really have high expectations for myself," Park said at the International Skating Union (ISU) World Single Distances Speed Skating Championships at Gangneung Oval in Gangneung, Gangwon Province. Located some 230 kilometers east of Seoul, the brand new arena will host speed skating races at the 2018 PyeongChang Winter Olympics, and is hosting its first world championships as an Olympic test event.

"I still wanted to set a personal best, and I am really happy that I did," Park added.

It was the first time this season Park cracked the 39-second mark. Her personal best, though, was only good enough to put Park in 18th place among 24 skaters. She entered the worlds ranked 26th in the ISU World Cup points standings. 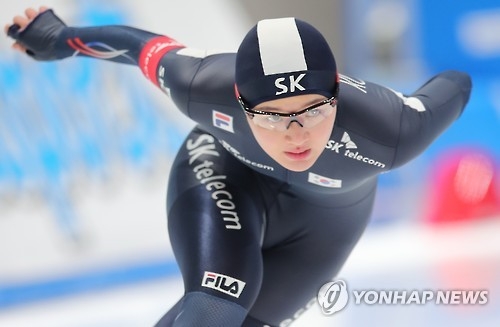 Still only 24, Park could have remained competitive in short track, despite the sheer depth of talent in South Korea. But after mulling retirement after Sochi, Park decided instead to give herself a new challenge, hoping to win an Olympic medal in speed skating as well.

With the next Winter Games under a year away, Park appears to be a long shot for the podium. If nothing else, though, Park said she felt the ice at Gangneung Oval suited her just fine, and perhaps competing before the partisan crowd could give her an extra push.

"In terms of the speed of the ice and the corners, I think I am well suited here as a former short tracker," Park said. "For sprinters, it's pretty easy to accelerate on this ice. I am not even sure if it was my own performance or the fast ice here that helped me set the new personal record."

One downside to having switched to speed skating is that she's ailing in parts where she had never before felt any pain.

"Since we're using different muscles in speed skating compared to short track, my knees are hurting like never before," she said. "While I was in short track, I had to take shots in my back to fight the pain, but my back is perfectly fine now."

Park is slated to skate at the Asian Winter Games starting Feb. 19 in Sapporo, Japan. Park won a gold and a silver in short track at the previous Winter Asiad, held in 2011 in Kazakhstan.

"I have no idea how I am going to skate there," she said. "But I feel like I've been getting better and better. The season is almost coming to an end. I hope to end it on a high note with a great race at the Asian Games."