Seo Jung-hwa and Seo Jee-won are the two women on the national moguls skiing team managed by Toby Dawson, the Korean-American who won the bronze medal at the 2006 Turin Winter Olympics. The skiers are currently in PyeongChang, Gangwon Province, some 180km east of Seoul, for the International Ski Federation (FIS) Freestyle Ski World Cup.

The FIS World Cup is one of the test events for the 2018 PyeongChang Olympics.

"We are working hard for the Olympics at home next year," said Seo Jung-hwa after her qualification round at Phoenix Snow Park. "We just hope many people will visit here next year and watch us perform." 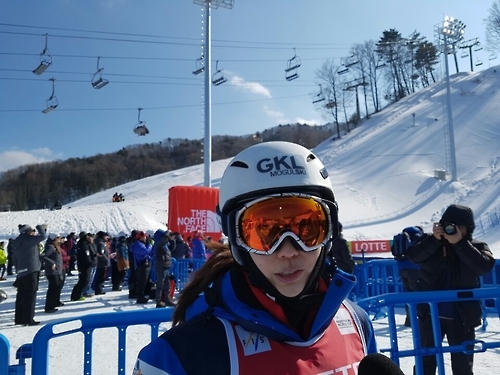 Jung-hwa and Jee-won are cousins. The 26-year-old Jung-hwa made her the international debut in 2006 and Jee-won, 22, followed her three years later.

At the FIS World Cup here, the two skiers had mixed results. Jung-hwa finished sixth with a score of 73.50, the best World Cup result for a female South Korean freestyle skier. However, Jee-won failed to advance to the finals for the top 16 skiers.

Jung-hwa and Jee-won finished 26th and 27th in the first round qualification respectively. In the second round, Jung-hwa finished third with a score of 73.44, but Jee-won was 19th at 62.75.

Jung-hwa eventually reached the super finals, where the top six skiers compete for medals. Though she missed the podium, the sixth place finish was also her personal best. She previously finished ninth at a World Cup in Italy last year.

"This season, I'm going for new jump tricks and that's why I'm having some difficulties," Jung-hwa said. "But I'm trying to raise the degree of difficulty of my jump because of the Olympics next year. For this World Cup, I just want to execute my moves cleanly."

Jung-hwa, who previously competed at the 2010 and 2014 Olympics, said she has big expectations for the next Winter Games.

"I'm excited that the Olympics are going to be here," she said. "I will give my utmost effort to impress home fans."

Jee-won, who finished No. 6 in World Cup dual moguls competition in 2015, was disappointed with her performance, but will not give up her efforts toward her second Olympics. The 22-year-old's next stop is Japan, where she will compete at another World Cup and the Winter Asian Games.

"It's a pity that I failed to execute some details in my second race," she said. "But there are big competitions ahead. I will forget today's result and prepare for the next events."

The two skiers promised that they will support each other to collect good results at the upcoming races.

"We don't really express it much, but we rely on each other very much," said Jee-won. "But during the competition, the coach doesn't like us hanging out together, because he wants us to focus on our own races."