SEOUL, Feb. 11 (Yonhap) -- Stacked with a handful of major league stars, the Netherlands may present the toughest test for South Korea at next month's World Baseball Classic (WBC), the Korean manager said Saturday.

South Korea will host the first round action for Pool A at Gocheok Sky Dome in Seoul starting on March 6. Israel and Chinese Taipei are the two other nations in Pool A, but South Korean boss Kim In-sik said he was most concerned about the Dutch team.

"Their infield alone is loaded with major league talent, and I think their pitching will also be strong," Kim said at a press conference in Seoul. "I think they'll be the toughest foe in our group, though Chinese Taipei and Israel will also be difficult opponents."

They'll be joined by Jonathan Schoop of the Baltimore Orioles, Didi Gregorius of the New York Yankees and Jurickson Profar of the Texas Rangers.

Three of those players -- Bogaerts, Gregorius and Schoop -- all hit at least 20 home runs last season. Simmons, a two-time Gold Glove winner, is considered one of the very best defensive players at any position in baseball.

At the previous WBC in 2013, South Korea lost to the Netherlands 5-0 in the first round and failed to reach the second stage. Kim said he has set a modest goal for his team this time. 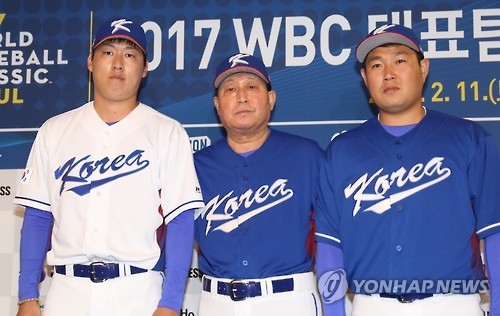 "Our primary goal is to make it out of the first round," Kim said. "I don't think we've ever set out for any tournament with confidence, but as we continue to play games, our fear will gradually disappear. We'd love to take the championship, but we'll have to take it one step at a time."

Kim will set up national team camp in Okinawa, Japan, on Sunday. From the 28-man roster, 21 checked in to the team hotel in Seoul Saturday. Five KBO players are already training in Okinawa with their respective clubs, and will join the national team Sunday.

South Korea will be in Okinawa until Feb. 23. It will play two Japanese pro clubs, Yomiuri Giants and Yokohama DeNA BayStars, and the minor league affiliate of the KBO club LG Twins.

Kim said he won't be seeking any quick magic at the camp.

"I don't expect the players to suddenly get so much better over such a short period of time," the manager said. "We'll work on building chemistry, especially among the infielders. And pitching has always been the driving force behind previous national teams. We'll make pitching our focal point."

Once back home from Okinawa, South Korea will face Cuba on Feb. 25 and 26, and Australia on Feb. 28 in exhibition games.

The top two teams after the round-robin play will move on to the second round in Tokyo against the top two nations from Pool B. Japan, Australia, Cuba and China are in Pool B.

South Korea reached the semifinals at the inaugural WBC in 2006, and finished runner-up to Japan in 2009, with Kim In-sik as the manager for both occasions.

For this year's WBC, South Korea had to scramble to assemble a healthy roster. A handful of KBO stars pulled out following offseason surgeries. Among the country's major league players, Los Angeles Dodgers' Ryu Hyun-jin and Minnesota Twins' Park Byung-ho were never considered because of injuries. Choo Shin-soo of the Texas Rangers and Kim Hyun-soo of the Orioles were dropped from the provisional roster because of their club commitments. Pittsburgh Pirates' infielder Kang Jung-ho was cut from the team following a DUI accident in December.