SEOUL, Feb. 11 (Yonhap) -- A team of special prosecutors said Saturday it sought an arrest warrant against a former university president again over allegations that she gave admission and grading favors to the daughter of President Park Geun-hye's close friend.

The special probe team said it requested that a local court issue a warrant to arrest Choi Kyung-hee, a former president of Ewha Womans University, on allegations that she gave undue favors to the daughter of Choi Soon-sil who stands at the center of a corruption scandal also involving Park.

The request came as the court rejected an arrest warrant against her last month, citing difficulty in recognizing the need for her detention.

Choi Kyung-hee, who led the university from 2014 to 2016, is suspected of having directed or collaborated with other professors in helping Chung Yoo-ra gain admission to the school despite her alleged ineligibility.

She has been grilled by the team over the charges, but denied all allegations raised against her.

The team led by Independent Counsel Park Young-soo is probing the allegation that Chung's mother used her ties to President Park to peddle influence and win favors.

The scandal led to the president's impeachment in December and the Constitutional Court is reviewing the legality of her impeachment. 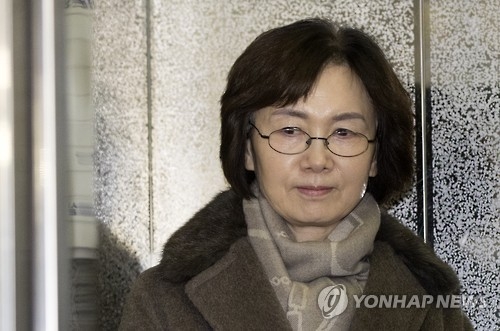