Seo finished sixth in the women's moguls super finals with a score of 73.50 at the FIS Freestyle Ski World Cup in PyeongChang, Gangwon Province, some 180 kilometers east of Seoul. Though she missed the podium, it was still the highest World Cup finish by a South Korean freestyle woman skier.

Previously, Lee Mee-hyun, who competes in slopestyle, had the best World Cup result with a seventh-place finish in Italy last month.

In the World Cup, the top eight performers directly advance to the finals after their first run, while those who finish from No. 9 to No. 28 have to go through another qualification round to earn one of the remaining eight spots in the finals.

In the finals, the 26-year-old Korean scored 76.74 and booked her spot in the super finals for the top six skiers. She edged out K.C Oakely of the United States by 0.39 point to earn her first super finals appearance at the World Cup. 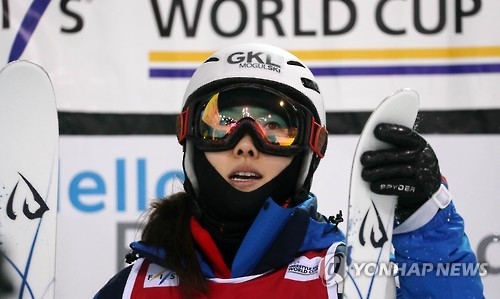 The women's title went to Britteny Cox of Australia, who bagged her fifth win of the season. The 22-year-old scored 81.66 points, beating Justine Dufour-Lapointe, the reigning Olympic champion, by 3.31 points. Andi Naude of Canada took the bronze with 78.16 points.

Cox also secured her No. 1 World Cup ranking this season with victory. She is now 171 points ahead of Dufour-Lapointe.

On the men's side, Canada's mogul skiing star Mikael Kingsbury won the gold medal with a score of 86.71 points. The 2014 Sochi Winter Olympics silver medalist edged out Dmitriy Reiherd of Kazakhstan by 0.01 point to claim his fifth World Cup victory of the season.

Philippe Marquis of Canada was third with 85.94 points.

Kingsbury, considered one of the best mogul skiers in history with five consecutive overall World Cup titles, easily reached the finals after topping the qualification round at 86.81.

Kingsbury, 24, extended his lead in World Cup points this season with his victory. He now has 620 points, 248 points ahead of No. 2 Benjamin Cavet of France, who finished fourth at PyeongChang.

The FIS Freestyle Ski World Cup is one of the test events for the 2018 PyeongChang Winter Olympic Games, which is less than a year away.

The FIS Snowboard World Cup, also a test event for the PyeongChang Games, will be staged at the same venue on Sunday.