GANGNEUNG, South Korea, Feb. 11 (Yonhap) -- If South Korean speed skater Lee Sang-hwa were to pull off a three-peat at next year's Winter Games on home ice, she'll most likely have to contend with her Japanese rival Nao Kodaira.

Kodaira has captured two medals at the ongoing International Skating Union (ISU) World Single Distances Speed Skating Championships at Gangneung Oval in Gangneung, Gangwon Province. She won the 500m title over Lee on Friday, with the new personal record of 37.13 seconds, and earned a silver in the 1,000m Saturday at 1:14.43, her best time of the season. Lee, the two-time reigning Olympic champion in the 500m, withdrew from the 1,000m here to rest her ailing right leg.

Kodaira's showing sent a strong message with the 2018 PyeongChang Winter Olympics under a year away. Speed skating will be held at the same Gangneung Oval, some 230 kilometers east of Seoul. 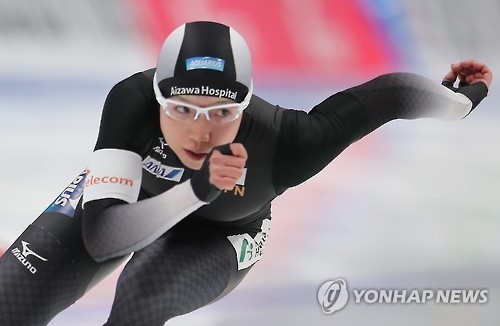 And so far this season, there really hasn't been much of a rivalry between Kodaira and Lee. The Japanese skater is unbeaten in seven 500m races this season -- six at ISU World Cups and one here on Friday -- while Lee, bothered by a right calf injury, has yet to win a 500m race in six starts.

The two will be on a collision course again later this month, when the Asian Winter Games open in Sapporo, Japan, on Feb. 19.

Asked about her ongoing battle with Lee, Kodaira said she doesn't feel any added pressure.

"We're good friends, and I think we push each other," Kodaira said through an interpreter. "As an Olympic champion, Lee is a mentally strong skater with great technique."

Speaking of mental strength, Kodaira said she improved the mental aspect of her skating during her two years of training in the Netherlands. She moved to the country after the 2014 Sochi Winter Games, where she finished fifth in the 500m, with the hopes of learning from Olympic medalists in a country with rich speed skating traditions.

And Kodaira said she was so determined to improve herself that she never once thought about coming home during her two years, despite her difficulties with language and food.

She credits her work with the Dutch skaters with helping her emerge as an international force at the relatively advanced age of 30. Kodaira is three years older than Lee.

The Japanese tried to temper her expectations for the 2018 Winter Olympics.

"First, I want to do my best and post good times in both the 500m and 1,000m," Kodaira said, without specifying whether she'd like to win multiple medals. "I'll have to improve myself further."