"Spring Day," the title track of the new album, soared to No. 1 on all eight major music streaming services, including Melon, Mnet, Olleh Music and Genie, after the album's release. Other numbers from the album also ranked high on many charts. 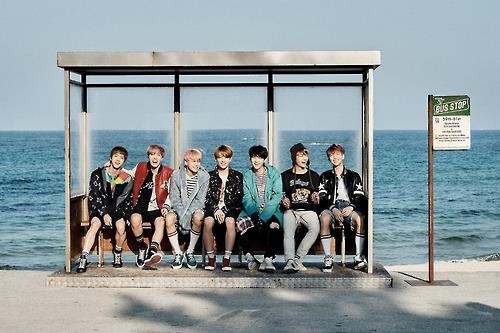 Melon, South Korea's largest music streaming service, even had a temporary server issue, with the album's access delayed for about 20 minutes due to fans rushing to the group's page and posting comments.

BTS's album features 18 tracks, including four new ones - "Spring Days," "Not Today," "Outro: Wings" and "A Supplementary Story: You Never Walk Alone." The seven members participated in writing songs and lyrics, and producing the album.

According to Big Hit Entertainment, the team's agency, it is both the follow-up and extended version of the previous album "Wings," which was released in October. "Wings" sold 751,000 copies, becoming the highest-selling album last year in South Korea.

On Feb. 18-19, it will hold "2017 BTS Live Trilogy Episode III Wings Tour in Seoul" at the Gocheok Sky Dome in southwestern Seoul.