SEOUL, Feb. 15 (Yonhap) -- An acquaintance of the half-brother of North Korean leader Kim Jong-un said he did not respond to advice to seek asylum in South Korea, a U.S. broadcaster said Wednesday.

The South Korean resident in Malaysia told Radio Free Asia (RFA) that he used to recommend that Kim Jong-nam go to South Korea rather than live in constant fear, as the Seoul government would protect him.

"But he just smiled mischievously without reacting to my recommendation," said the acquaintance who added that he frequently met Kim before the 45-year-old eldest son of late North Korean leader Kim Jong-il was killed in Malaysia.

Kim Jong-nam died at an airport in Malaysia on Tuesday after being attacked by two unidentified women with "poisoned needles," said a government source with knowledge of the situation. The suspects fled the scene and Malaysian police suspect North Korea was behind the killing.

He also said Kim was accompanied by security guards sent by China every time he went on a trip, wondering whether the guards were at the scene of the murder and mentioning the need to confirm the whereabouts of a Chinese-Singaporean woman who used to travel with Kim.

According to RFA, the South Korean friend of Kim Jong-nam, a former senior official of the South Korean residents' group in Malaysia, said he had dined with Kim many times when he made trips to the Southeast Asian country, expressing his feelings that he was shocked by the news of Kim's death.

"I have never heard of Kim since the summer last year, when our meeting at a restaurant was exposed to news media," the acquaintance said. 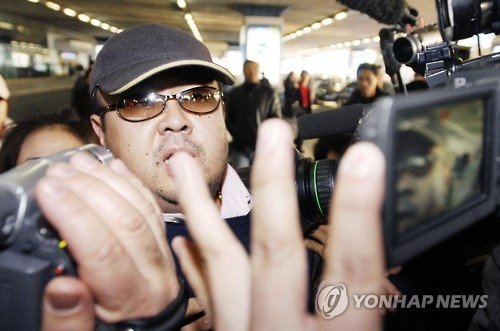 N. Korean leader's half-brother did not respond to advice to seek asylum in S. Korea: report

N. Korean leader's half-brother did not respond to advice to seek asylum in S. Korea: report