As the Seoul Central District Court issued a warrant to arrest Lee Jae-yong, vice chairman of Samsung Electronics Co., he became the first leader in Samsung's history to be detained on criminal charges.

The independent counsel team on Tuesday sought the writ against Lee after its first request on charges of bribery, embezzlement and perjury was rejected by the same court last month. The court at the time said it cannot acknowledge the necessity of Lee's detention.

After some three weeks of additional investigation, the prosecutors leveled more charges against Lee for allegedly hiding criminal proceeds and violating the law on transferring property abroad in the process of giving bribes to President Park's friend Choi Soon-sil.

Following the court's decision, Lee will stay at a detention center in Uiwang, south of Seoul, where he has been waiting for the ruling.

Prosecutors suspect that Lee gave or promised some 43 billion won (US$36.3 million) worth of bribes to the president's jailed friend in return for the government's backing of a merger of two Samsung affiliates in 2015.

The business arrangement was seen as critical for the smooth management succession of the group from ailing Samsung Electronics Chairman Lee Kun-hee to his only son Jae-yong.

The Samsung scion was questioned a second time on Monday as special prosecutors accelerated their probe into the high-profile case with their investigation deadline slated for Feb. 28.

The investigation team on Thursday asked Acting President and Prime Minister Hwang Kyo-ahn to extend the period for a month, but it is yet unclear whether Hwang will approve the request.

Park, who was impeached by the National Assembly in December last year, is awaiting the Constitutional Court's decision on whether to uphold her ouster. 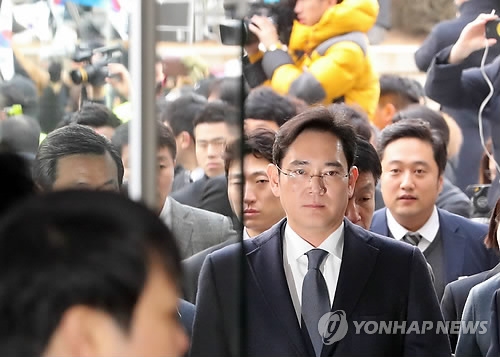