SHENYANG, China, Feb. 21 (Yonhap) -- Chinese authorities have delayed the customs clearance of textbooks to be used at South Korean schools in China, pushing back the schools' classes for the new academic semester, sources with knowledge of the matter said Tuesday.

South Korean residents expressed concerns that the postponement of the customs clearance is due to a row between Seoul and Beijing over the planned deployment of a ground-based, anti-ballistic missile system in South Korea by the U.S. military.

The sources said the Chinese authorities have added a new condition to the customs clearance procedures for textbooks, holding the books that will be used by around 6,000 students at the Chinese customs for 10 consecutive days.

South Korean schools in China are feared to suffer setbacks in their classes during the new academic semester, which begins early next month, as the textbooks are unlikely to be distributed to them in time.

The textbooks from South Korea, which arrived at the Chinese customs on Feb. 11, were to be picked up by South Korean diplomatic missions in China after customs clearance and be distributed to the schools.

Before the incident, the Chinese customs had cleared all South Korean textbooks immediately following their arrival in the country. Distribution of the books could be completed in about 10 days.

But this time the customs demanded that each South Korean mission wishing to receive the textbooks submit an official document certifying they will only be used for educational purposes.

A source said on condition of anonymity, "As having to submit an official document was not in the existing textbook customs clearance procedures, it is interpreted as a kind of retaliation against the planned THAAD deployment."

The Chinese authorities also required an official seal from each mission's chief stamped on the document, preventing the textbooks from being delivered this month.

The Seoul-based National Institute for International Education, a body under the South Korean Education Ministry that supplies books to South Korean nationals in China and other foreign countries, said the distribution of textbooks was originally scheduled to be done by Friday but the delay in the customs clearance will push back the spring classes. 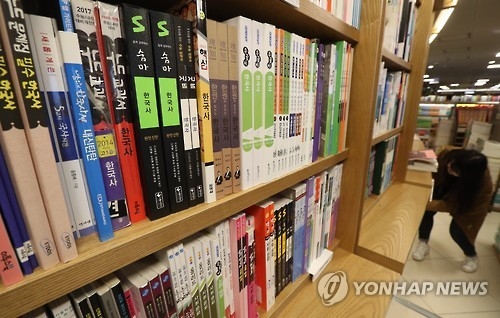