SEOUL, March 7 (Yonhap) -- Nearly one in four prisoners at North Korea's labor camps die of disease while in confinement, a Seoul-based think tank said in a report released Tuesday.

The report by the Asan Institute for Policy Studies said that the fatality rate at North Korea's political prisons is estimated at close to 25 percent, with most of the deaths caused by various diseases.

Go Myong-hyun, an Asan research fellow who authored the report, said that he has calculated the fatalities based on interviews with 20 former prisoners at the North's Jungeri Prison, who defected to South Korea in recent years. 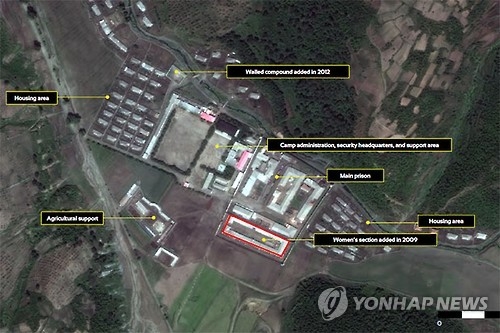 Go said the 20 interviewees observed a total of 276 fellow detainees at the Jungeri labor camp from 2002 to 2012 and reported that 24.3 percent of them died before being released.

North Korea's labor camps, also called reeducation centers, are mostly for political prisoners and are notorious for their unsanitary and life-threatening conditions.

In the interviews, the defectors testified about diseases, malnutrition and other inferior conditions for prisoners at the Jungeri camp.

"The number of interviewees was limited in the report but it is meaningful that the fatality rate has been calculated through their multiple testimonies," said Go.

"It is notable that eight in 10 North Korean prisoners suffered from malnutrition before death," said Go. "Poor diet and sanitation appeared to worsen the inmates' digestive system diseases, while congestion led to a high rate of respiratory ailments."

The fellow said conditions at North Korean reeducation camps are extreme and cannot be compared to detention facilities in other countries.