SEOUL, March 9 (Yonhap) -- Slumping South Korean slugger Kim Tae-kyun will not be available in the final World Baseball Classic (WBC) game against Chinese Taipei on Thursday with an illness.

Kim, who went 0-for-7 in South Korea's losses to Israel and the Netherlands in Pool A play earlier in the week, went to the emergency room in the wee hours of Wednesday morning with flu-like symptoms. He also skipped team practice later that day.

Kim, a perennial All-Star for the Hanwha Eagles in the Korea Baseball Organization (KBO), has been the lightning rod of criticism and the poster child for the team's anemic offense, which generated just one run in 19 innings.

South Korea has already been eliminated in the first round for the second consecutive WBC. A loss to Chinese Taipei Thursday will put South Korea in last place and force the country to play through the qualifiers for the next WBC. 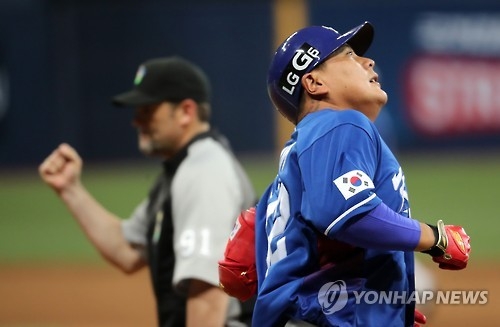 With Kim not available, manager Kim In-sik made a slew of lineup changes.

Left fielder Min Byung-hun, the one player who has swung the bat well, will start things off, with former leadoff Lee Yong-kyu moved down to No. 2.

Choi Hyoung-woo, the reigning KBO batting champion who only went 2-for-22 in seven practice games before the WBC, will make his first start, as the DH hitting seventh. He didn't play against Israel, and got a pinch-hit at-bat against the Netherlands in the ninth inning.

Shortstop Kim Ha-seong will bat eighth and second baseman Seo Geon-chang, who had hit in the No. 2 hole the previous two games, will bat ninth.