"TWICE was picked as Pocari Sweat's model for the beverage's 30th anniversary," JYP Entertainment said, adding that TWICE has become the first idol group to model for the iconic drink product.

In the TV commercial which begins airing Wednesday, the team's nine members head to the beach sporting attire that matches the drink's traditional blue and white color scheme.

Donga Otsuka, a joint venture company between Donga Pharmaceutical of Korea and Otsuka of Japan, said that "TWICE's energy, combined with the ad's concept, will win the hearts of consumers."

Since its debut in late 2015, TWICE has had four-consecutive hit songs, the most recent being "Knock Knock" released last month, a remarkable streak for a team that debuted only about a year and a half ago. 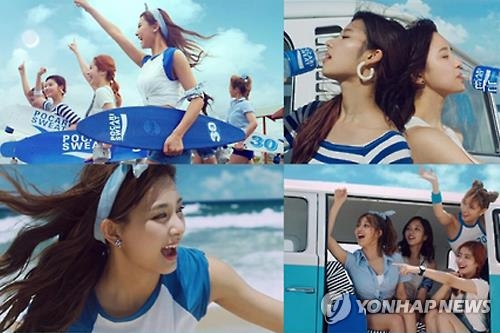