SEOUL, March 17 (Yonhap) -- The dispute over the deployment of a U.S. missile defense system in South Korea remained a key source of contention in the debate Friday among four contenders seeking to become the presidential nominee of the Democratic Party.

During the debate hosted by four cable broadcasters, including Yonhap News TV, front-runner Moon Jae-in and three other candidates united in opposing other parties' proposal to revise the Constitution before or concurrently with the May 9 presidential election.

They also offered a range of policies to reduce economic and social inequality and improve the well-being of ordinary citizens by increasing government spending and creating jobs.

But they remained poles apart over the crucial national defense issue, which left South Korea walking on a thin line between beefing up national security and the U.S. alliance, and trying to limit the impact on ties with China.

Seongnam Mayor Lee Jae-myung called for the cancellation of the deployment of the Terminal High Altitude Area Defense (THAAD) system saying it will have a limited role in defending against North Korea's threat and even increase the danger of war.

"South Korea is facing a security crisis because of (the system)," Lee said. "It has escalated the risks for war. In case of a military collision between the U.S. and China, missiles will fly into the Korean Peninsula."

Also citing the economic tension with China, Lee claimed that Seoul should scrap the deployment. China has been protesting Seoul and Washington's decision to deploy the THAAD system, rolling out economic retaliations, such as banning tour agencies from selling trips to South Korea.

Front-runner Moon Jae-in did not raise explicit opposition to its deployment but claimed the issue should be handled by the next administration.

"It is not an issue that can be concluded just by saying yes or no," Moon said.

The former head of the party said he can maintain the Seoul-Washington alliance and the economic cooperation with China at the same time. He also urged Beijing to end its retaliations against South Korean firms.

South Chungcheong Gov. An Hee-jung also vowed to maintain a healthy relationship with Washington and Beijing at the same time but also claimed that the agreement between South Korea and the U.S. should be respected.

The contenders also offered their respective priorities in economic policies.

Moon said his administration will put the priority on creating more jobs, especially for young adults, claiming that the current job market is "catastrophic."

"If I become the president, I will allocate more budget to addressing the unemployment issue," Moon said, claiming that the creation of jobs is the best welfare policy that can be provided by the government.

The former party head said he would give budget priority to job creation and reduce work hours to achieve the goal of adding 810,000 public jobs and 500,000 private sector jobs.

An echoed the view but claimed that he will also seek to improve the working environment of South Koreans. The governor pledged to introduce a sabbatical year for all employees if elected.

During the debate, which also featured Goyang Mayor Choi Sung, the three minor candidates focused their attacks on Moon, seeking a last-minute turnaround to catch up with the most popular candidate.

South Korea will hold an early presidential election on May 9 as the Constitutional Court removed Park Geun-hye from the top elected office last week. 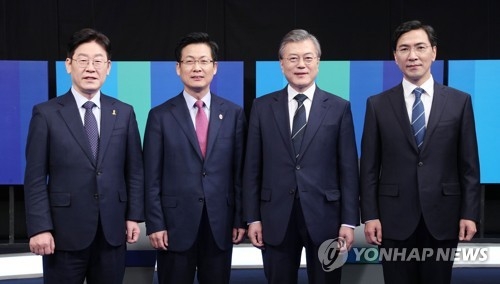