Beijing has been heaping a slew of trade restrictions on Korean companies and their goods, in what appears to be coming from its ire over the stationing of the Terminal High Altitude Area Defense (THAAD) system on the peninsula. China sees it as a threat to its regional security, which it claims will be used to spy on its own military.

While its hostile measures have been so far largely aimed at a major Korean retail giant and blocking its own people from traveling to Korea, they began to affect smaller Korean firms based on the mainland.

According to industry sources here, a Qingdao-based Korean firm encountered an unexpected visit from the Chinese public security officials who questioned Korean employees on their views over the THAAD issue on a video cam.

"We just said that we hope the matter will be resolved in a good way between the two countries. We're so worried that the Chinese could impose any form of restriction," a company official said.

Other sources said that there have been increasingly frequent random checks on illegal immigrants and employment in Korean towns in Guangzhou and Shenzhen, while a Korean mining company based in Shenyang underwent a fire inspection without notice.

Another firm was ordered to remove its outdoor LED signboard that read its company name in Korean letters from the rooftop, citing failure to go through "proper administrative procedures."

In Seoul, employees of a cosmetics firm staged a protest against the THAAD deployment, saying they had to do so to prove to their Chinese partner that they are opposed to it in return for a contract. They apparently took a photo of themselves to show it to the partner.

"Smaller companies have no choice but to act in accordance with the Chinese requests," said Kim Tae-hwan, an official at the Korea Federation of SMEs. "The government needs to act to resolve the issue." 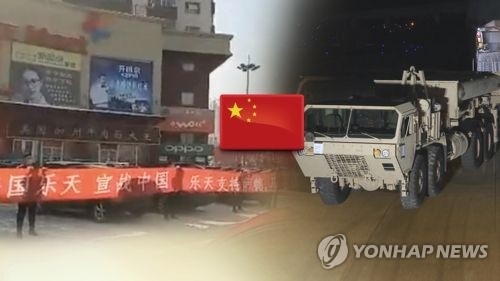