SEOUL, March 31 (Yonhap) -- Former President Park Geun-hye has become South Korea's third president to be taken into custody after a court approved her arrest warrant on a string of corruption charges Friday. 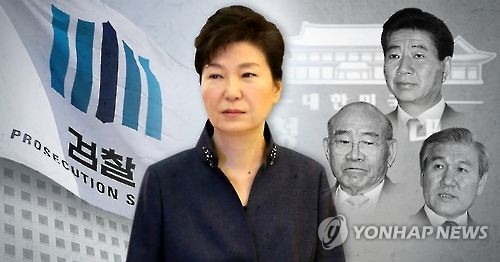 The first arrested former leader, Roh Tae-woo, led the country from 1988 to 1993. He was arrested on Nov. 16, 1995, on charges of creating massive slush funds with bribes from local conglomerates such as the now-defunct Daewoo Group.

Later in the year, Roh faced additional charges of mutiny for staging a military coup on Dec. 12, 1979, after former President Park Chung-hee was assassinated by his own intelligence chief in October of the same year.

In April 1997, the Supreme Court upheld a lower court's decision to sentence Roh to 17 years in jail and have him pay 262.8 billion won (US235 million) in forfeitures. But then-President Kim Young-sam pardoned him in December 1997 under his campaign of "grand national harmony."

The second president put behind bars was Roh's predecessor Chun Doo-hwan, who led the country from 1980-1988.

Chun was told to appear for questioning on Dec. 2, 1995, over the charges that he masterminded the military coup in 1979 and ordered a bloody crackdown on a pro-democracy movement in the southwestern city of Gwangju, 320 kilometers south of Seoul, on May 18, 1980.

Chun rejected the prosecution's summons and denounced its investigation as "politically driven." He then went down to his hometown of Hapcheon, some 350 kilometers south of Seoul.

Prosecutors arrested him in Hapcheon. Later, he faced additional charges of amassing slush funds worth hundreds of billions of won while in office.

On April 20, 2009, former President Roh Moo-hyun was also grilled by the prosecution over a corruption scandal involving his family. But the probe was halted after he committed suicide on May 23 of the same year.
(END)