SEOUL, March 28 (Yonhap) -- An aide-turned-critic of former President Park Geun-hye on Tuesday won the nomination of a splinter conservative party for the presidential election in May.

Rep. Yoo Seong-min received 62.9 percent of the vote in the primary of the Bareun Party, officials said, making him the first official party nominee ahead of the May 9 poll.

Bareun, which means "righteous" in Korean, split from Park's then ruling party in the wake of her impeachment over a corruption scandal. 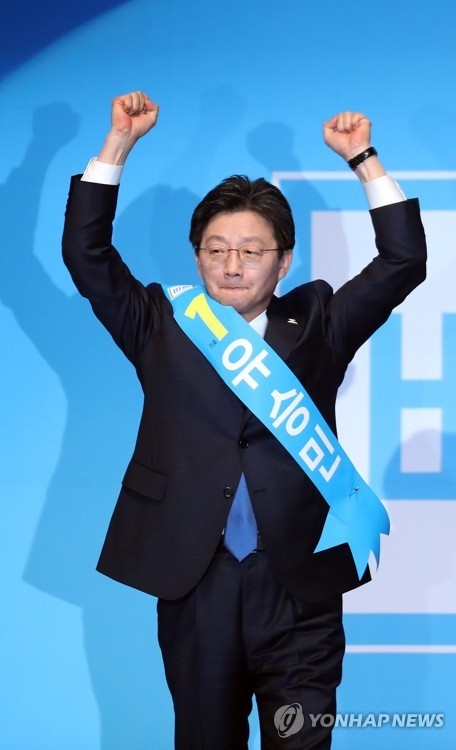 Yoo's victory was widely expected after he won 59.8 percent of the votes in an early part of the primary against Gyeonggi Province Gov. Nam Kyung-pil.

"I, Yoo Seong-min, will lead the way to newly establish the conservatives in this land," the nominee said in his acceptance speech at a convention in eastern Seoul. "I will become the hope of the new conservatives. I will gather the hopes of the people yearning for a reconstruction of the conservatives and boldly be chosen by the people in the presidential election."

Yoo is a four-term lawmaker who served as chief aide to Park when she was head of the then-Grand National Party in 2005. The two fell out in recent years after Yoo openly expressed opposition to Park's policies.

The minor party will likely face an uphill battle as the election landscape is heavily tilted toward the liberal camp, according to observers.

In the latest presidential poll by Realmeter, Yoo and Nam garnered 2.2 percent and 1 percent, respectively.

Yoo has shown an open attitude toward forming a coalition with other parties to challenge front-runner Moon Jae-in of the liberal Democratic Party.

However, there are doubts that Yoo could emerge as the single unified candidate with polls consistently indicating greater support for both of his likely counterparts.

Yoo dismissed such talk as premature.

"I didn't join the race in order to unify (candidacies)," he told reporters at the convention. "A merger could happen or not happen, so as the presidential nominee of the Bareun Party, I have no plans whatsoever to obsess over it or focus only on it."

If necessary, he will finish the race alone, he added.